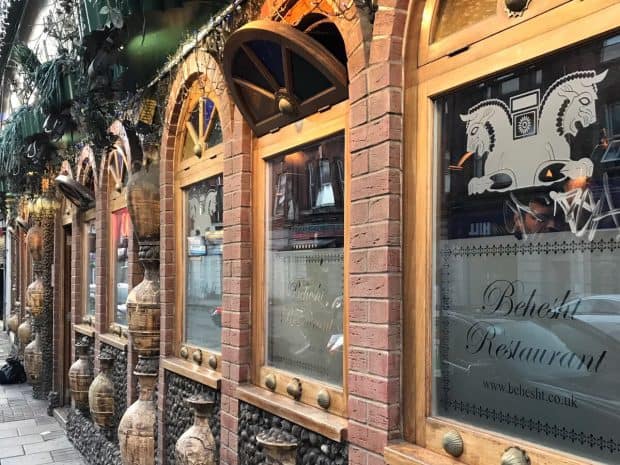 I’ve mentioned before how I’m known to be notoriously late, making BW question how one person could have such poor time management. That is, until he got to know my family! He now knows to give at least a half an hour leeway for meeting any member of my family anywhere. One instance included my sister making us 2.5 hours late to a wedding reception, causing us to miss canapés and drinks – he’s still sour about that one. A more recent example is when we planned to meet my parents at Behesht for dinner.

BW and I got to the restaurant at 6:45pm as we had a movie to catch at 9pm. At 6:55pm, my parents informed us they were 5 minutes away. At 7:15pm, they called to say they were parking, and fiiiinally at 7:30pm, Mum and Dad walked in! Hungry, we got ordering.

A classic persian dish of chargrilled aubergine that has been smooshed and mixed with garlic, lemon juice, olive oil, and salt and pepper. Tasty with a smooth consistency.

A colourful platter of fresh greens, a hunk of cheese, radishes, and walnuts. A refreshing touch, especially when eaten with the naan.

I would have liked more softness and squishiness when it came to Behesht’s thin and crispy naan.

Bargh is a fairly new venture for BW and myself, adding a little excitement to our Persian meals. The thinly sliced lamb fillet had a burst of flavour in each bite, with the rendered fat adding a fantastic richness to the meat, but I would have liked the bargh to have been a little softer.

I opted for two of the Special Chickens, but one with naan so it soaks up all the delicious juices and the other with rice. Large pieces of chicken breast arrived that had been coated in a lemon saffron marinade and placed on an open fire grill to get that deletable smokiness.

A squeeze of lemon really sealed the deal for me, but I would have like more of the saffron to come through in each bite. The koobideh clearly had a good fat to meat ratio as it was super juicy and tender, but more flavour in the meat would have been ideal.

I always find that good service really completes the meal at any restaurant. Unfortunately,  service at Behesht was abysmal e.g. forgetting our orders and not even bringing them out when reminded, taking 20 minutes to give us a card machine to pay etc. Behesht, I understand you’re busy but a little bit of good customer service goes a long way.

The total bill for 5 people amounted to £60, including drinks and service, so £12 each. Goodness, this was perhaps one of the cheapest meals I’ve had. Although we were sharing, the portion sizes at Behesht are massive and even between the 5 of us, we could not finish what was in front of us. All in all, dinner at Behesht was delightful and the entire clan was pleasantly surprised. Was it the best Persian? No, but definitely on the top 5 despite the terrible service. 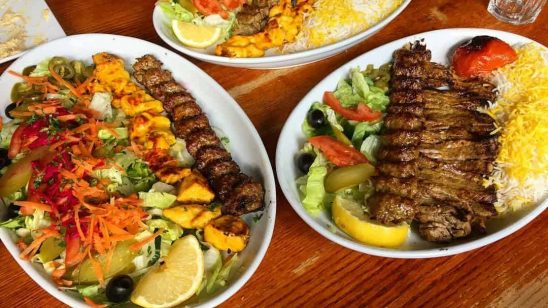 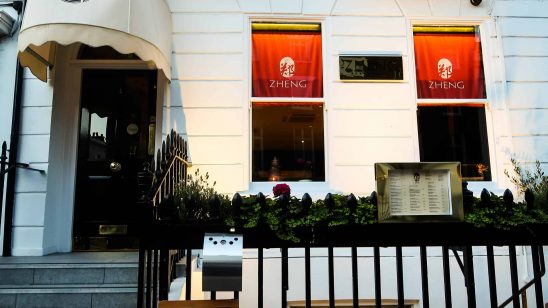