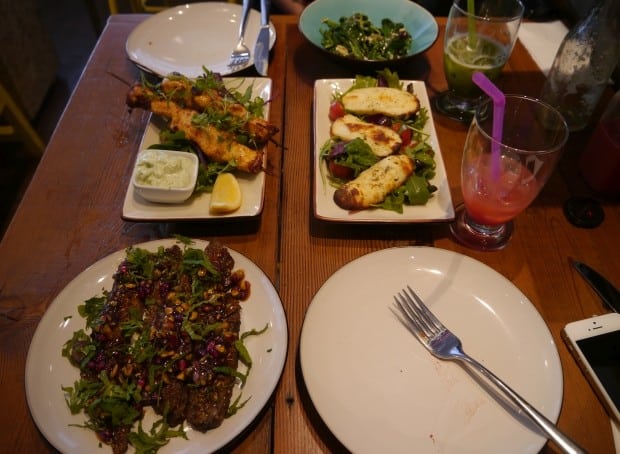 I have always been a “late” person. When BW and I are getting ready for dinner, I will be the one jumping into the shower five minutes before we have to leave, and I’m also the one who tells my friends “I’m right around the corner”, when in fact I haven’t even left the house yet (sorry guys). Heck, I was even late to one or two of my own wedding events. It’s a terrible, terrrrible trait of mine and I’m trying to get better – I promise!

One recent example of my tardiness was this pop-up, Ceru, that has been in Soho since December 2014. They close this Sunday but will be located in a permanent spot in a few months THUS the reason I am reviewing them. I’m giving you guys the chance to get all  excited about the type and quality of food they will be offering!

For this occasion, I grabbed one of my favourite friends for a good old catch up over some Levantine yumminess.

For the starters, Ceru had a choice of four dips: Pancar, Fadi, Spicy Roast Red Pepper, and Houmous. Wanting to have a taste of them all but not over order, we opted for the “four in one” platter with a side of pita [£1.50]. The pancar had been made from a creamy mixture of garlic, roasted beetroot and yoghurt, and then topped with pistachios. I wasn’t sure what to make of the pancar as it definitely requires a certain love and appreciation for beetroots, and alas was our least favourite of the four. Next was the fadi which had a base of pureed fried courgettes. This was really, really enjoyable as you could taste the kick from the garlic and lemon! The roast red pepper dip was my personal favourite; a simple mix of red peppers, chillies, pomegranate molasses, and crushed walnuts, but was delightful especially when mixed with the incredibly rich and creamy houmous.

The pita was served as slightly toasted, little triangles that had been topped  lightly with za’atar.

The salad arrived piping hot and doused in olive oil with velvety lumps of labne, dried cranberries, and little pieces of the house bread with za’atar scattered around. The cranberries’ sweetness cut through the bitterness of the spinach and made a nice mix with the other savoury components. It was a light yet more-ish addition to the meal.

For me to enjoy halloumi, the cheese needs to be perfectly cooked so that it is not rubbery or overly salty, which occurs a lot in Levantine restaurants. Ceru’s version was spot on with just the right amount of squidge and a delicate, subtle saltiness.

Slices of lamb arrived piping hot, and topped with a sprinkling of za’atar, pomegranate molasses dressing, pomegranate seeds and pistachios. The first thing that hits you when you take a bite is that this tastes exactly like a shawarma with the aromatic flavouring, but using cuts of actual meat that instantly shred away and any pieces of fat just melt in your mouth. This was then followed by the delectable sweetness from the pomegranate seeds, and the pistachio’s nuttiness. From the slow roasted lamb to the combination of different textures and flavours, this was a winning dish for me.

Two skewers of chicken cubes arrived on top of salad with a garlic and herb sauce on the side. The chicken was really moist and juicy, and although the flavouring was subtle, you could still pick up on the zingy lemon and the slight spice from the paprika.

The final bill amounted to £47.30 between two, including drinks and service, so approximately £24 each. Maybe a little pricey but I had ordered two main dishes to myself and you can taste how good the quality of the ingredients used at Ceru are. Although the portions seem quite small here, they are meze style and I was actually quite full after the dipping platter; I just about managed half of my mains. My advice is to get the “four in one” with pita to share and a main each. There is something for everyone here whether you are a vegetarian (unfortunately, my friend) or pescatarian, or even have certain intolerances.

Their food is simply superb and considering everything here is made to order (and you can see this in the open kitchen), the dishes were served quite fast. We didn’t leave the restaurant feeling stuffed or greasy, but pleasantly full. It’s a shame that Ceru is only a pop up, and a bigger shame that they end their run on Rathbone place this Sunday however, the staff confirmed there will be another pop up soon in Summer and also a permanent location will be confirmed later this year, which I am definitely looking forward to!

And to you guys, sorry I was late with Ceru but I guess it’s better late than never, right? 🙂 Do be sure to hurry over there before they close and I will keep you all updated on any news regarding their next opening! 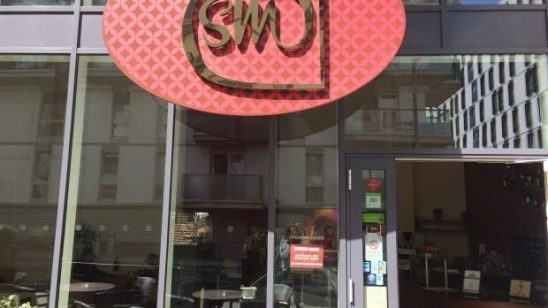 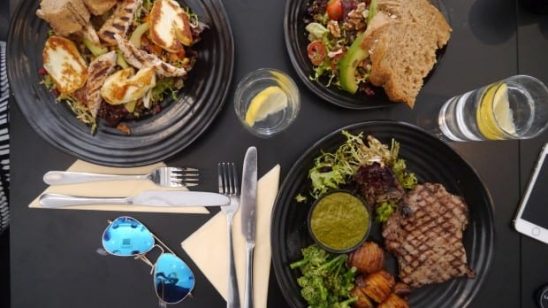