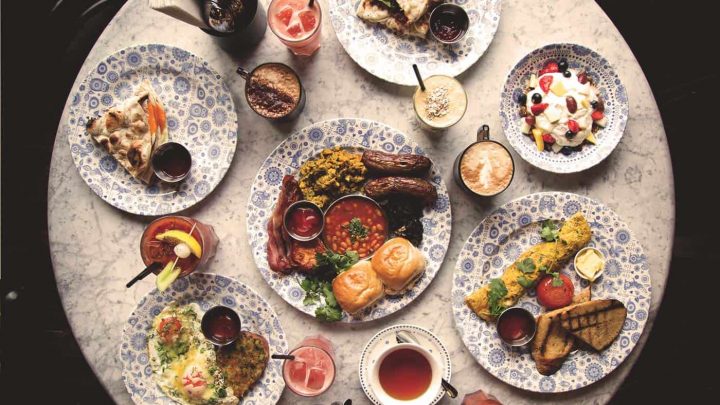 March 8, 2013 by HGAT No Comments
I’ve never really ventured much into the East side of London apart from the occasional visit to Brick Lane, but nearby the arty graffiti laden streets of Brick Lane lies Shoreditch.  What drove me to be in the infamous area after nightfall beats me; perhaps it was the warning my parents gave me of not going anywhere near the place alone at night.  But what was once known as “infamous” is now one of the coolest and cleaned up areas in the capital of London.  When night time hits, the youngsters crawl out of their homes and discover the heart of East End. Filled with quirky shops and cheap eats, Shoreditch has now become a popular hangout parallel to the famous streets of London like Oxford Circus.While walking along the hyped up street, my friends and I spotted a folded garage door spray painted with the word “Dishoom” on it.  Dishoom is certainly a name right out of an Indian movie.  It got me curious; is it Indian, does the food give a kick, and just what is with the name?!  It’s quite easy to miss Dishoom but belonging to the streets of Shoreditch, one can’t be surprised that the restaurant is quirky in its appearance.
Walking through, you come across an urban outside seating area with garden sofas and tables perfect for the hot summer days when you’re craving a cold refreshing mango kulfi.Dishoom is supposed to resemble the old Bombay cafes that overpopulated London in the 60s and we certainly felt like Bombayites once we walked in experiencing what could only be described as awe. The interior was designed accordingly to Indian culture but with a modern twist making you appreciate every small detail put in to the design of the establishment. The only niggle was that it was a little too dim so that once seated, we were forced to crowd around the one lamp set on the table in order to read our menu. 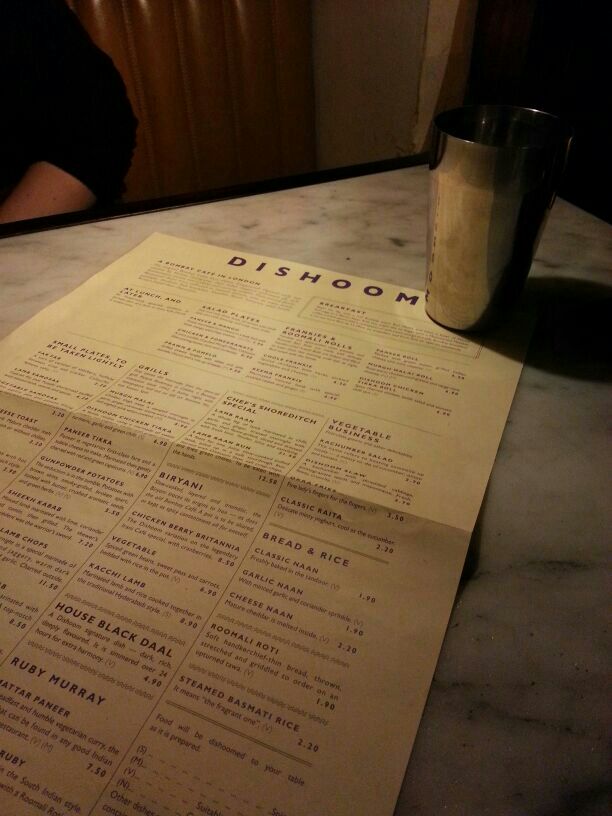 Before I move on, let me give you a quick description of my friends; JA & JP were the vegetarians of the night and JH and me were the carnivore of the pack.Okay, back to business: The menu listed classic dishes that you would receive in every tea shop you enter in India, such as pau baji and bhel.
Chilli Cheese Toast 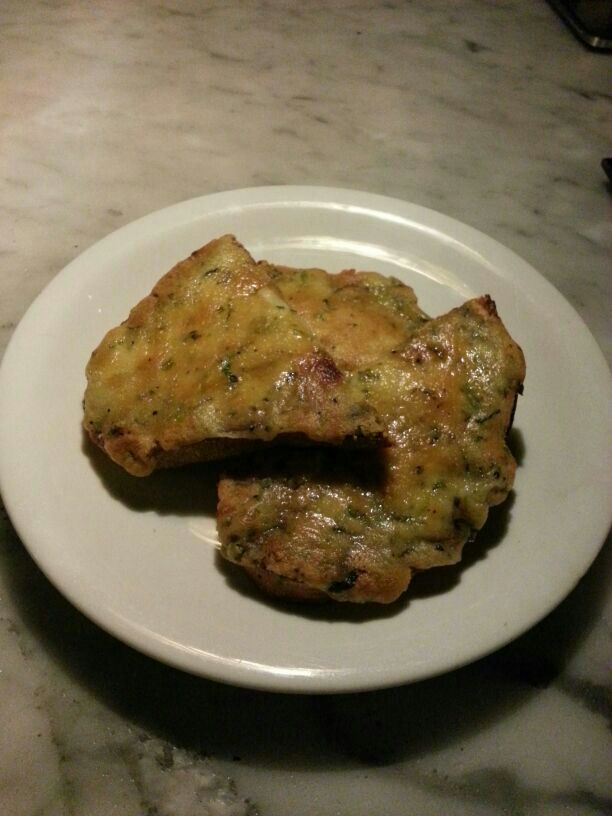 Yes, we were unexciting and went to an Indian restaurant to order cheese on toast. But which Indian restaurant has ever served cheese on toast?  It was however delicious with the crispy toast topped with melting cheese that was spiked dangerously with chilli.  It is a dish that can be made at home, but we couldn’t resist and left the plate completely empty, even of crumbs! It was cheesy, it was spicy (JH constantly reaching for her water), but it was worth it, mmmmm…
Chicken Tikka
Succulent pieces of boneless chicken tikka generously littered the plate. Once again JH was suffering from spice overload and couldn’t resist ordering a big bowl of plain yoghurt to help cool down the flames from this hot and juicy chicken.
Paneer Tikka 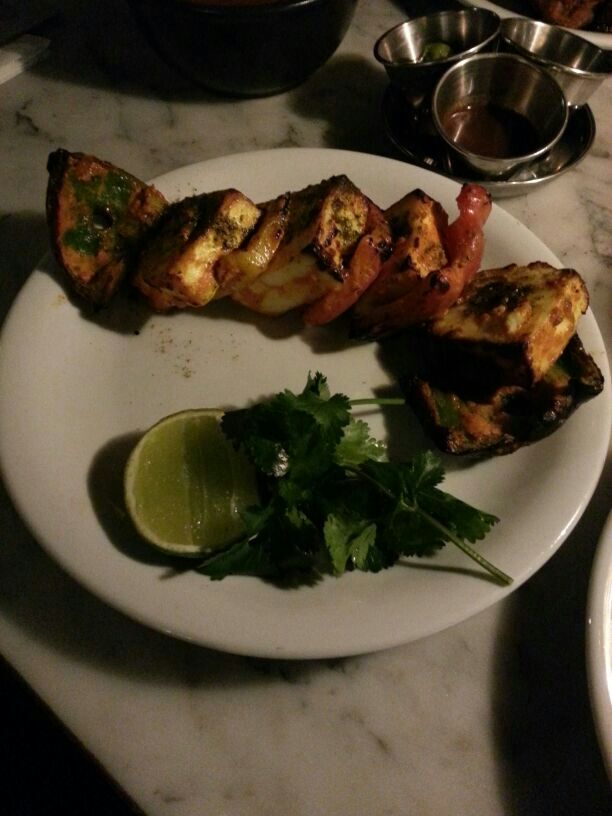 For those who do not know, paneer is also known as cottage cheese and is an important part of some culture’s diets. It does not taste of cheese and flavours very well when cooked correctly.  Thick-cut grilled paneer arrived on a plate with generous seasoning. I couldn’t help but feel envious of my friends’ food so I may have stolen a bite or two. It had a slight crisp exterior with a soft and flavourful interior.Ruby Chicken 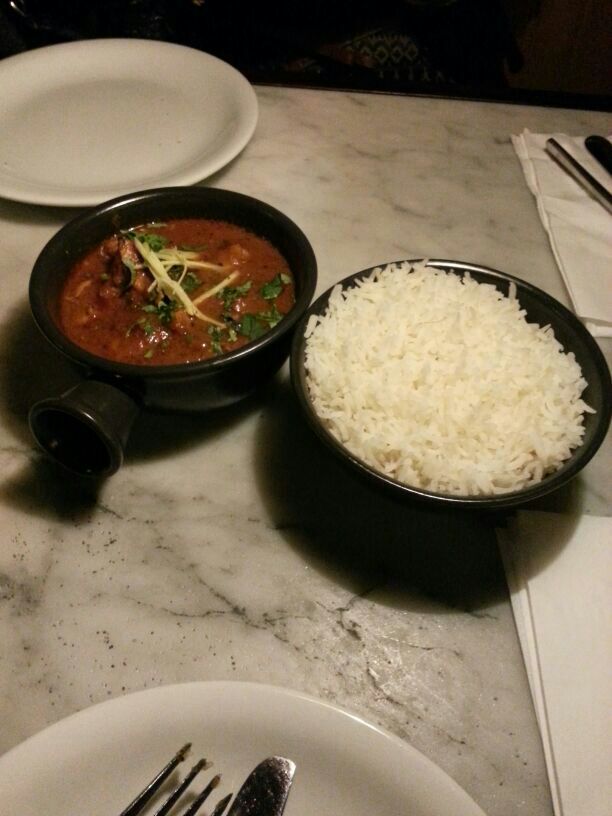 Chicken curry has never been a favourite of mine, but due to the serious lack of non-vegetarian curries on the menu, we went for one that looked the most appetising. Sad to say that there was no new found love for chicken curry today as this dish lacked in salt and any serious flavour.
Mattar Paneer 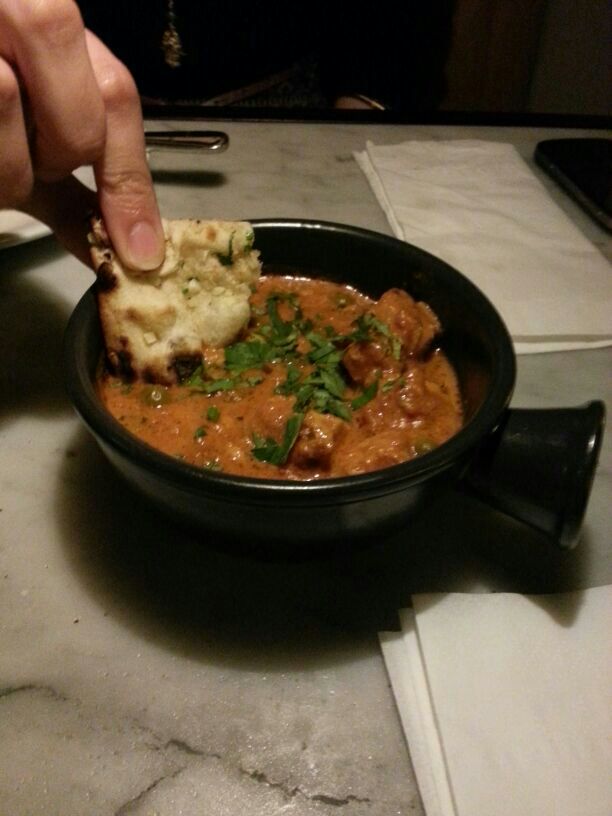 You can never go wrong with paneer and is a great substitute for chicken for vegetarians,or so it seems as this curry was delicious and the best tasting out of the bunch. The curry sauce was creamy with chunks of paneer hiding in between the layers of orange and peas (and may have almost converted me into a vegetarian but shhh)
Black Dahl 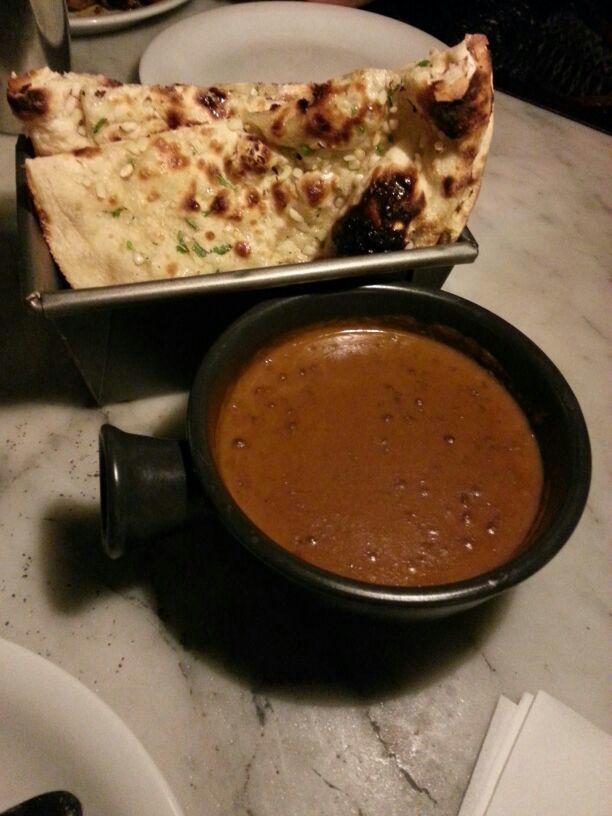 Supposedly the signature house dish, I did not see the specialty behind it as once again it lacked salt.  The texture of the curry was good with it not being too thick or runny, but really that is the only true comment I have for it.  I’m sure you get the idea of how great this dish was that night.
Chocolate Chai 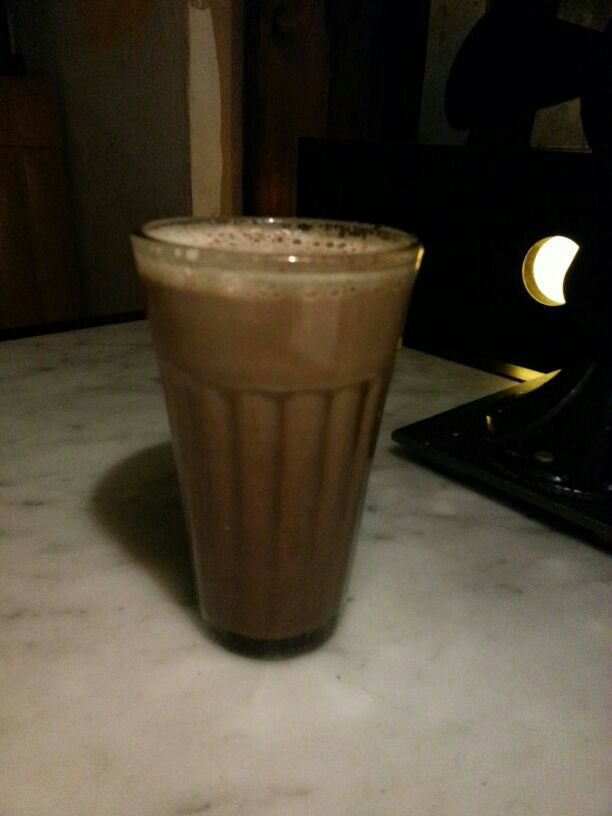 I have heard a lot about chocolate chai but have never tried it myself.  Obviously this was going to be my first night of true choco-heaven-chai.  An interesting mix of sweet but spiced, this tea and chocolate combination had me in a…undescribable…Indian heaven perhaps?  When you take a sip, the hot spiced flavour of tea warms your throat like the ones served in almost every shop in Bombay, but then a shock of chocolate enters your system and entirely melts your insides.  The tea definitely keeps you seated and in no rush to leave.The vegetarians won this round, but us carnivores were a close second. Maybe I’m just so used to my mum’s cooking that I didn’t fully appreciate the food that we received, but then again there’s nothing like a good home cooked meal.  I was disappointed with the chicken dishes and perhaps it is because I am a meat lover, but with the right flavour and spice any dish can taste good.  Dishoom lacked the punch of a hero and served a good kick from a spicy villain. 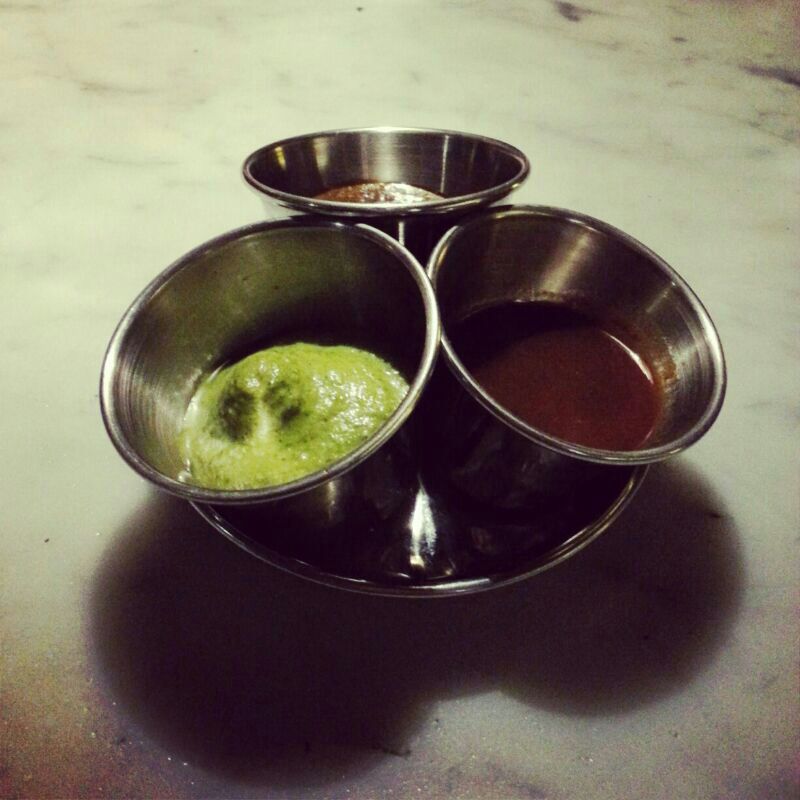 We left here with hardly a dent in our wallet with the vegetarians paying £10 per head and JH & me paying just under £20 each.The restaurant being clustered with youngsters and young business men in meetings made for a great atmosphere, so I would definitely visit again.  Perhaps the next time however I would rediscover the menu and order items such as the lamb chops or the lamb shank (which I’ve heard is very tasty). The desserts looked different yet interesting enough to order, however our stomachs couldn’t handle any more food and JH had probably grown an ulcer by the end of it, so maybe next time? I would suggest you visit Dishoom for the ambience and experience, but in order to truly enjoy your meal, stay away from the chicken curry dishes and ask what the favourite dishes are.  And before I forget, make sure you inform the waiter how spicy you can take your food, otherwise you too will be going through pots full of yoghurt!
The owners have verified a halal status and state that there is absolutely no cross contamination between the pork and non pork products as they use separate utensils.
Address:
Shoreditch:  7 Boundary Street, London, E2 7JE
Covent Garden: 12 Upper St Martin’s Lane, London, WC2H 9FB
Telephone:
Shoreditch: 020 7420 9324
Covent Garden: 020 7420 9320
Website: http://www.dishoom.com/
Nearest Station:
Shoreditch: Old street (2 minutes) or Liverpool St Station (7 minutes)
Covent Garden: Leicester Square or Covent Garden
Parking:
Shoreditch: Free parking in surrounding area after 6:30pm or pay and display
Covent Garden: Free parking in surrounding area after 6:30pm or pay and display
Tags: Central London East London Food Blog Halal Halal Food Halal Food Blog Halal Indian London Indian London 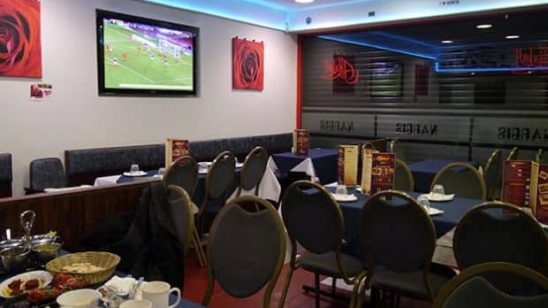 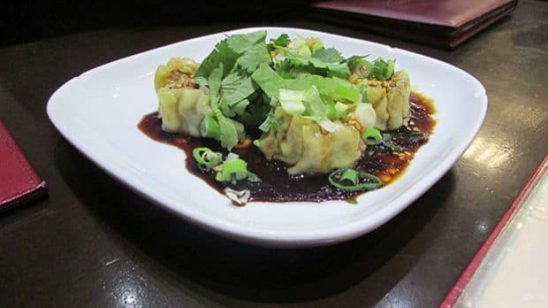