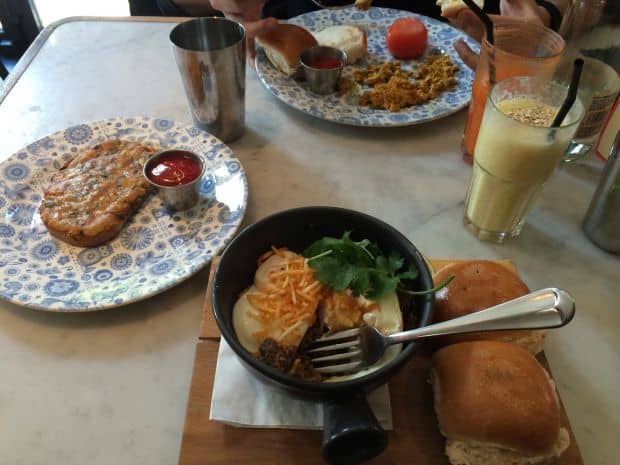 *The breakfast no longer serves halal*

There is no way I could do a brunch series without including a heart-warming Indian breakfast for one of the five days, so I dragged BW all the way to the beautiful Covent Garden bright and early (11am) this sunny Sunday morning. Having visited Dishoom before in Shoreditch, I was confident that their breakfast offerings would be just as good or even better than their extensive dinner menu. Dishoom is a restaurant that has been inspired by the numerous Iranian cafes that were prominent during the late 1800s in Bombay.

We made it just in time for breakfast and hurried to order! 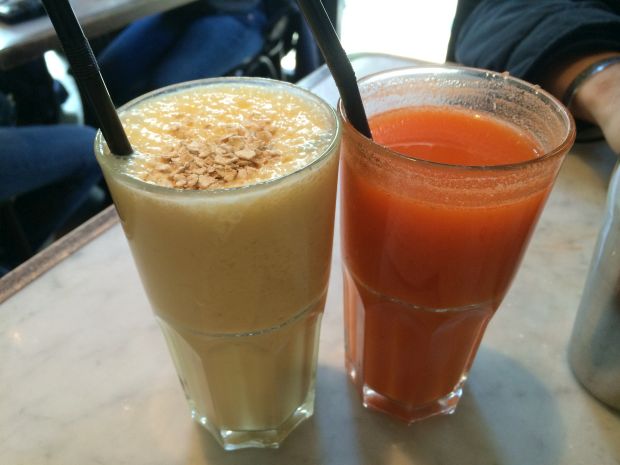 A lassi made of yoghurt, mangoes, bananas, and oats. Considering the ingredients used, it was surprisingly not heavy, and instead added a nice revitalising touch to the breakfast.The apple, carrot and ginger juice, was sweet but the ginger was a little bit overbearing. 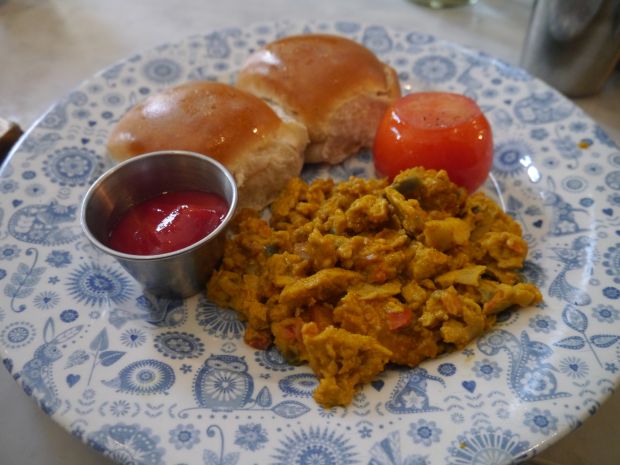 Bringing back fond memories of his childhood, BW ordered akuri. Akuri is a well-known dish in the Parsi cuisine of India and is made of buttery scrambled eggs with a kick of chillies, coriander, ginger and tomatoes. In Dishoom‘s version, the eggs were soft and fluffy, however the dish was quite mild in flavour. The pau was nice, squidgy, and buttery, and made a great accompaniment to the eggs. 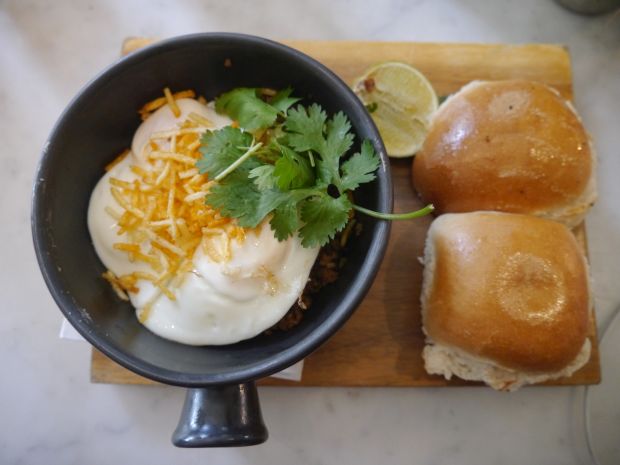 As this happened to be the only item on the breakfast menu that was halal, and it was also known to be the Parsi’s “power” breakfast, I just had to order this. What arrived was a big comforting bowl of spicy chicken keema with large chunks of chicken liver, and topped with two fried eggs and crispy sali (potato crisps). Eating the chicken keema felt like a big hug. The spiciness warmed you right up, the sali added a salty crunch, and in every couple of bites, you would be pleasantly surprised with a delicious piece of creamy chicken liver. The two eggs were not over-fried however the yolk was cooked more over easy as it did not run when cut. The pau served alongside it was the same as BW’s – buttery and soft – however BW suggested a much better use for it than for the keema, you’ll soon see why. 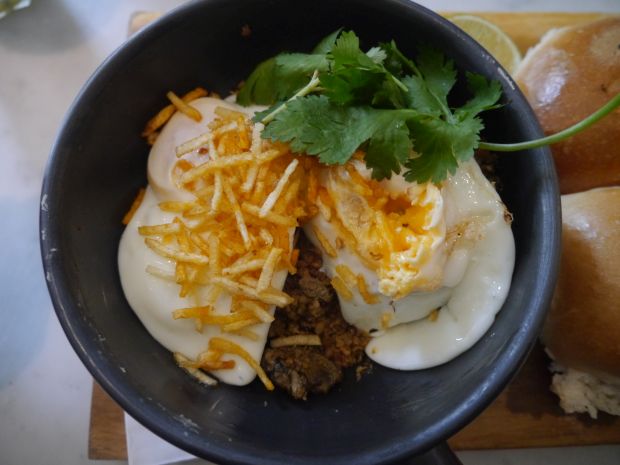 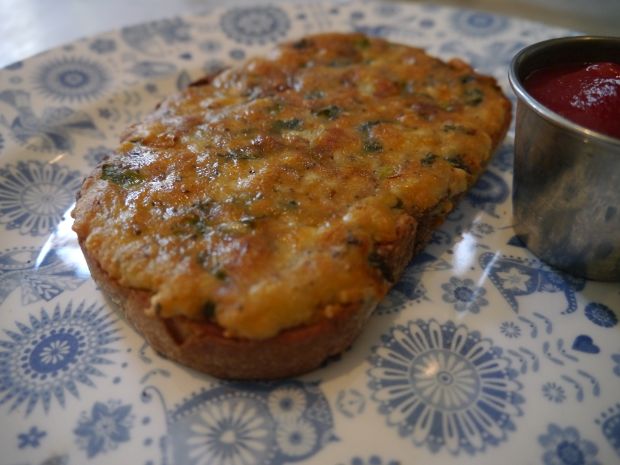 I had ordered this when I had gone for dinner previously at Dishoom but I just loved the gooey cheese with spicy chillies combination, so opted for it again! The bread served with it was crunchy and topped with an enticing layer of bubbling cheese and chopped green chillies. 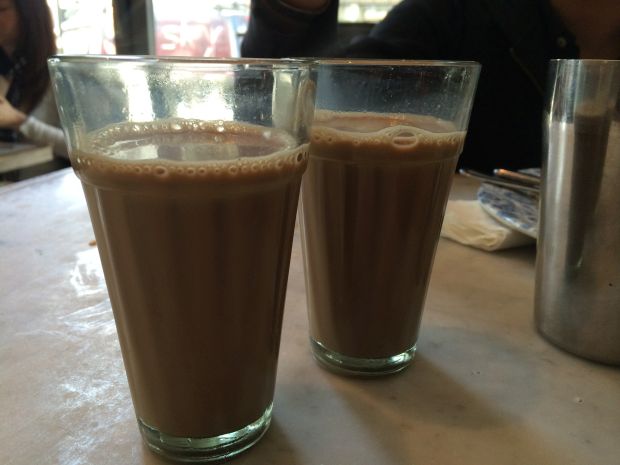 A small glass of hot masala chai which was perfect for dipping the pau that I had saved from earlier. The chai was great, maybe a little heavy on the cardamom.

In total, the bill came to £39.60 for two people including service, therefore £19.80 each. Their menu was sadly quite restrictive in terms of meat options but sometimes, only sometimes, a vegetarian breakfast is the way forward. Imagine a hot, fluffy naan, filled with cream cheese, runny fried eggs, and a dash of chilli flakes – I would love to eat that on a cold, windy day. However saying that, their chicken keema dish was really something else and was so scrumptious that I would keep going back just for that. The service was quick and attentive even though their restaurant was packed full of people.

Today is sadly the last day of my brunch series! But that doesn’t mean that the competition is over – you can still enter for a chance to win a £50 prepaid meal at any brunch venue of your choice out of the five! Please see below for details. I really hope you enjoyed this series as much as I enjoyed writing about it and I hope it will be a useful tool when deciding where to eat for your typical Sunday brunch. Now it’s time for me to hit the gym!

Halal status on lamb and chicken verified by restaurant.

As I will be visiting five brunch places, the lucky winner will get an opportunity to win a £50 prepaid meal to take their other half, best friend, mum etc, at one of the five and whichever one of the five you like most!

All you have to do is answer this super simple question and you will be entered into the draw!

So are you all ready?

In the UK, what name is used for the strips of bread used to dip into half-boiled eggs?

Leave your answer, name, and email address in the comment section below and I will pick one lucky winner at random. As well as leaving a comment, liking this post on the facebook page, retweeting this link on twitter with #HGAT, or posting this page on instagram tagged @halal_girl or #HGAT, will get you an extra entry! The competition closes on Tuesday 2ndDecember at 5pm and the winner will be announced on December 7th!

Terms and Conditions
Please let me know when you would like to dine at the restaurant of your choice out of the 5 so I am able to book this meal for you. The pre-paid value of £50 can be used for any item from the brunch menu and will be taken off the final total. It is non-transferable and cannot be substituted for cash 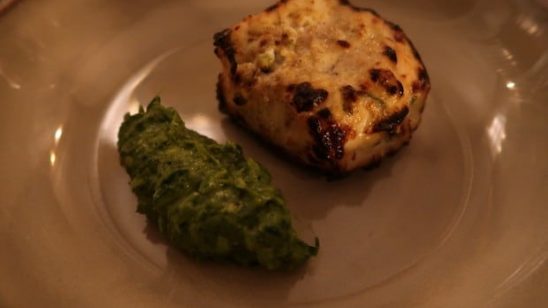 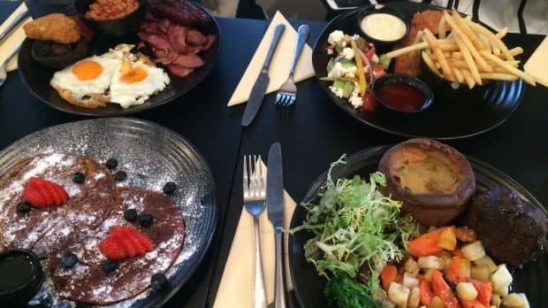