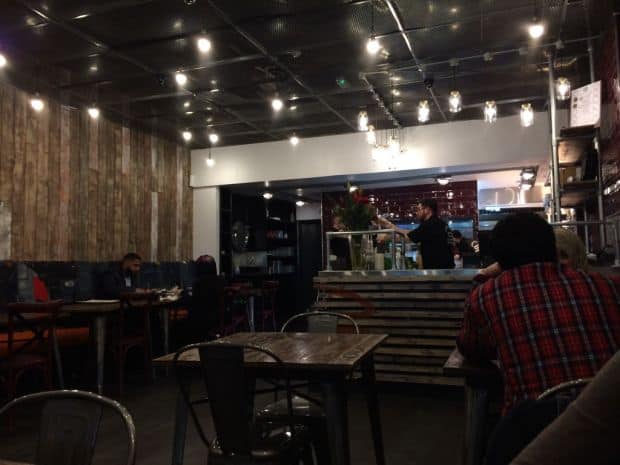 As most of you know, I got engaged a couple of months back and have, unfortunately, been on a so-called “wedding diet”. This “diet” means I have to eat healthy and exercise as much as possible – possibly the two worst things! Anyways, I’ve been pretty good in the last two weeks, so good that when I read about a new burger joint opening up, I instantly dropped that carrot stick and ran straight to the computer.

Typing in “Loaded Burgers”, I instantly found out its exact location and proceeded to head out the door. But I stopped in my tracks. Should I absolutely destroy the new healthy lifestyle I had recently adopted and sacrifice my body for my readers OR should I sacrifice my readers’ enjoyment of a new burger for a couple of lettuce leaves. You obviously know what option I chose – burgers here we come!!!

BW unfortunately sat this review out to maintain his figure so I decided to drag my best friend, L, along on this little adventure into Ilford!

The restaurant had a cool, hipster feel to it, with denim seats and mason jar lights. The crowd was young, but a few oldies popped in to grab a bite, and the majority were couples all digging into their delicious burgers! It was a little quiet but being a weekday, it wasn’t surprising.

From looking at the menu, they have a variety of options such as homeslaw, milkshakes, different types of burger patties (lamb, beef or chicken) and ribs. And for those brave souls, there is a burger that even Halal Girl can’t get her head around – it goes by the name of “Fully Loaded”. Dun dun dun! Beef, chicken and lamb patties with beef sausage, turkey bacon, turkey ham, onion rings, cheese, onions (both raw and caramelised), an egg, a potato waffle, lettuce and a tomato (just to be healthy) all squidged between a brioche bun. Just writing that sentence made me hungry again!

Thankfully, I didn’t order that burger otherwise any hopes of losing weight in the next couple of months would have vanished but instead we opted for the following… 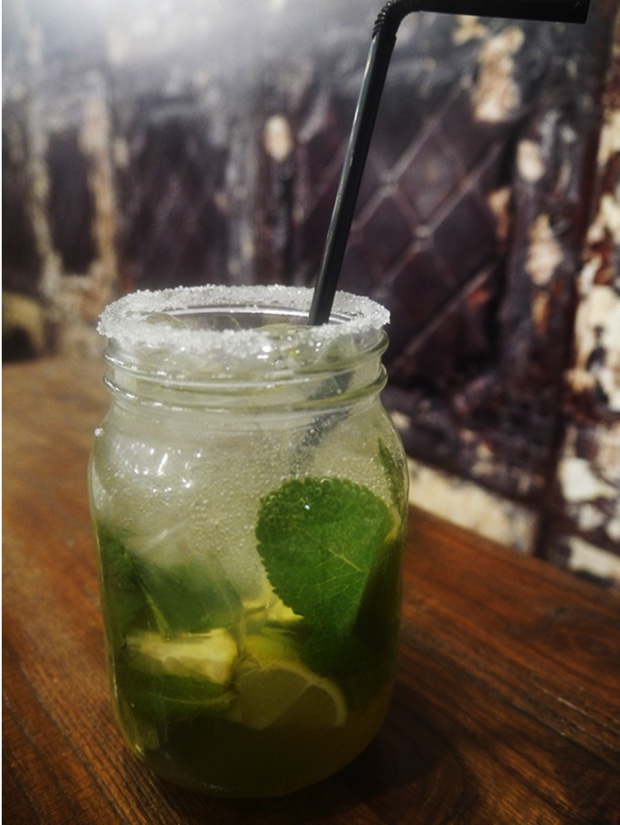 You can’t go wrong with a virgin mojito and Loaded Burgers didn’t fail to deliver. Both were icy, minty and topped off with a rim of delicious sugar. However, the drinks should have been served colder and the ice could have been crushed. Also the strawberry mojito became slightly too sweet after a couple of a sips. 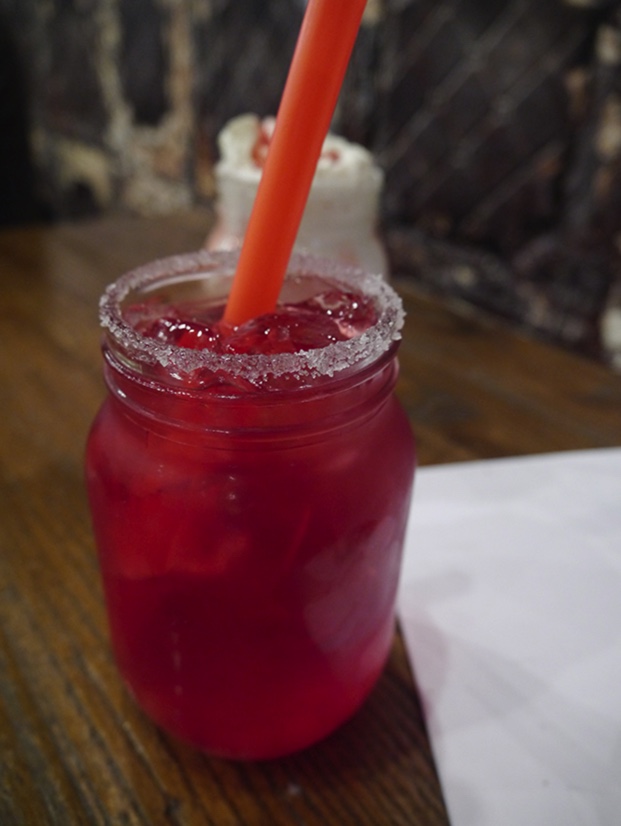 So as the waiter pointed out, Bubble Tea is like marmite – you either love it or you hate it. I haven’t had one before and L was curious to try it. Bubble Tea is a tea-based drink originating from Taiwan with small, tapioca balls in a milk or fruit based tea. Thanks to the helpful waiter who guided us as to what to choose, we opted for the strawberry flavour. It was way too sweet for my liking, maybe a different fruit flavour would have been better such as mango but I’m no expert when it comes to Bubble Tea. The tapioca balls were squidgy with a jelly-consistency and burst when you took a bite. I can see the appeal but for me, it wasn’t something I was a fan of! 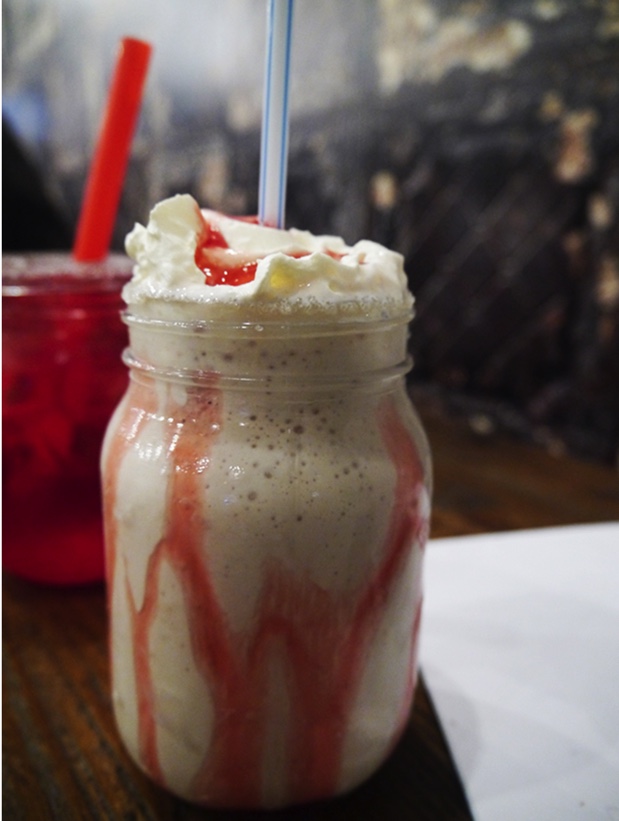 As you can tell, there is obviously a trend going on with the strawberry here but I couldn’t help myself especially when the waiter suggested it was the best milkshake out of the bunch. I’ve always been a vanilla type of gal so I was a bit wary as to what the strawberry milkshake had to offer. It arrived ice cold, frothy, thick and absolutely delicious. With strawberry syrup dripped along the sides of the glass and fluffy whipped cream on the top, I couldn’t help but to continue drinking and drinking until my stomach couldn’t handle anymore and I had to stop.

Finally on to the food… 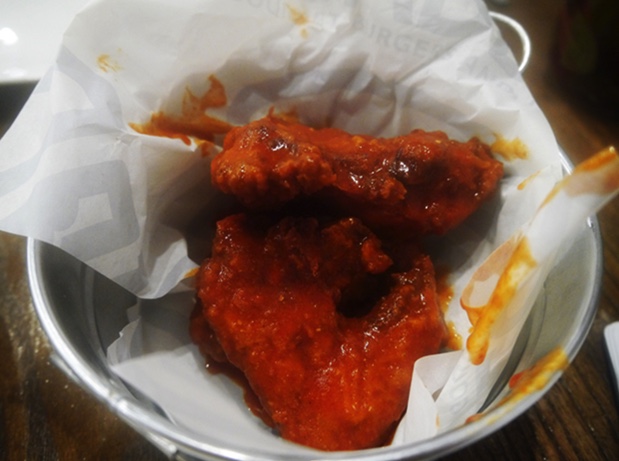 The usual buffalo wings I’m use to are small, double fried and crispy. The ones at Loaded Burgers are double the size, soft and drenched in tangy buffalo sauce. This wasn’t a necessarily a bad thing – in fact these were really good wings and were one of my favourite dishes of the night. As you take a bite into the wing, you get an instant kick of the spice of the buffalo sauce followed by the piping hot, juicy chicken meat. 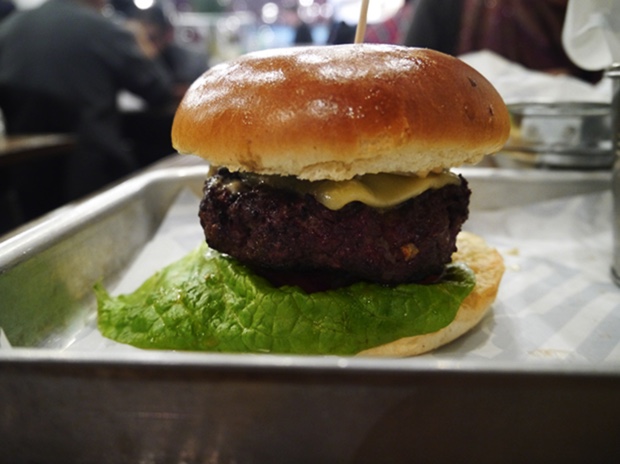 A must order at any new burger restaurant for comparison purposes, I opted for the classic burger and asked for it to be cooked to a medium – not medium well but a nice, bloody medium. What arrived in front of me was a beef burger patty sandwiched between a soft, buttery brioche bun, topped with salad and dripping in their house sauce, the Loaded Burger sauce. And lo and behold, when I cut the burger in half, it was cooked to that pink medium I had requested – we were off to a great start. 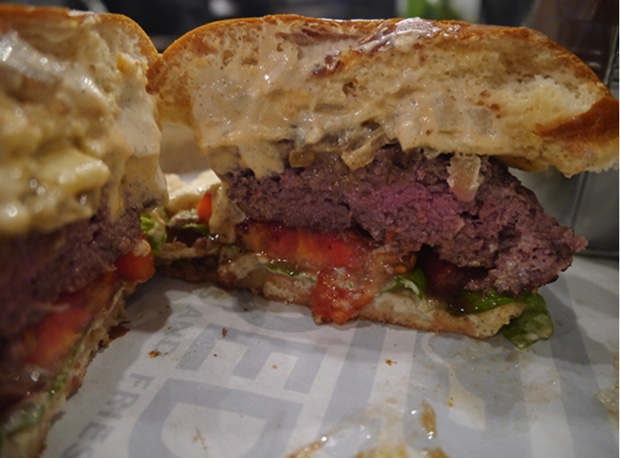 This was my first burger in a very long time and I wanted it to be amazing! The burger was great – juicy, full of flavour, and easy to handle. The brioche bun wasn’t too big so it didn’t take up most of the sandwich and the salad was minimal but still present.  I had also ordered a side of turkey bacon to put into the burger which tasted good but needed some more time on the grill to make it slightly crispy. 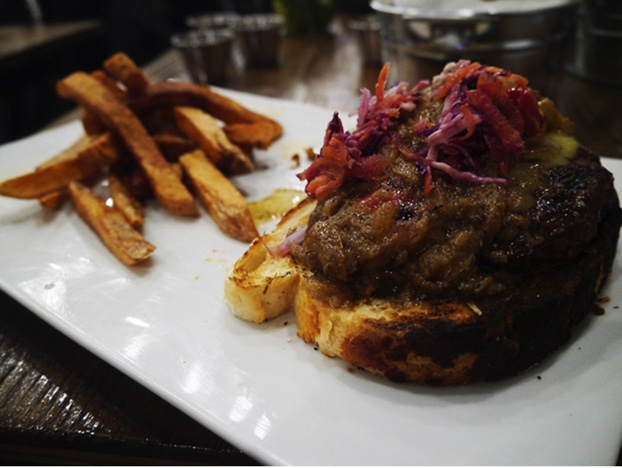 I love the name of this dish – just like cock scratchings, it is just one of those names to remember! There is nothing “topless” about this dish apart from the fact that the burger patty isn’t in a sandwich this time but is in fact lying there naked on top of a piece of French toast. Oh that cheeky little thing! It isn’t a combination you would usually associate with a burger joint but it worked. A medium cooked patty on a soft and sweet French toast, with sautéed peppers, caramelised onions and melted cheese. 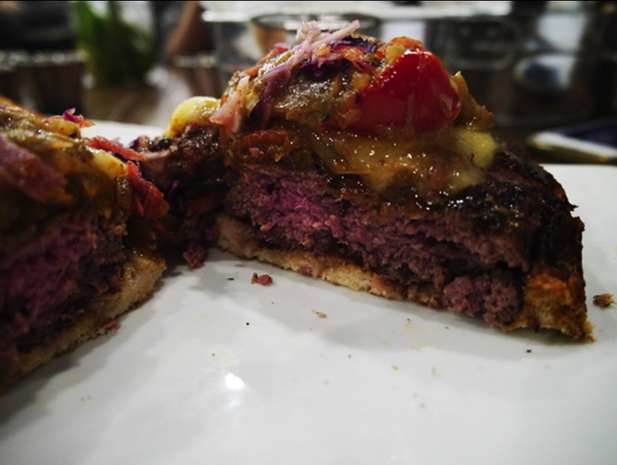 Again cooked to how I like it, I enjoyed this dish. The juice from the burger had made the French toast soak up all the flavour so it became soft (in a good way) but the toast itself could have been sweeter. The chips that were also served with the dish were also slightly bland and could have done with a little more time in the fryer to make it crispy.

Just a side note to say that from personal experiences with several burgers and steaks, especially burgers, I find that the meat tends to taste even better when cooked to a medium to medium-well. The reasoning behind this is that there tends to be more juices retained within the patty so when you take a bite, the burger isn’t dry but is nice and succulent. But that is my own personal preference and other people tend to find their burgers taste better when cooked to a well done! 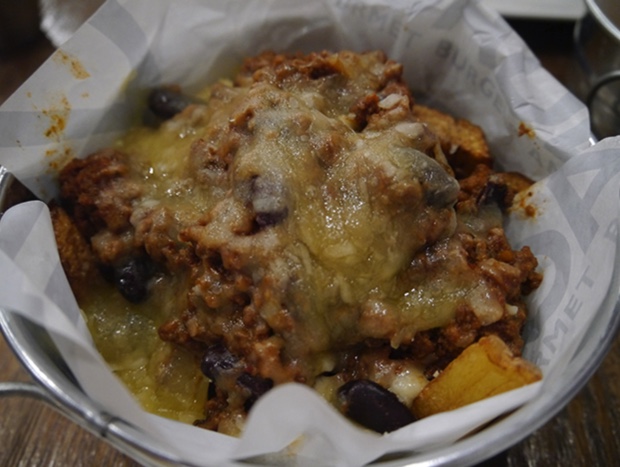 This, unfortunately, was a disappointment and I couldn’t quite put a finger on what the issue was. The chips that were used were bland, too soft and too large. These were then topped with a beef chilli mixed with kidney beans but we both felt that it lacked a small amount of salt, and then followed by melted cheese that seemed like pretty standard cheese. The dish wasn’t bad at all but it just lacked the flavour that was evident in all the other items we had ordered.

The total of the meal was £39.60 which was quite pricey considering it is just burgers but then again, these are gourmet burgers that are cooked with care. They pay attention to every detail of the burger and execute the order exactly how you want it. Loaded Burgers also provide take out options for those who prefer to savour their burgers at home.

Because the restaurant just opened up over the weekend, they have their small flaws which will, hopefully, be improved over the next couple of months and from what I tasted, their food is good – just in need of a slight tweak regarding their chips and chilli cheese fries. I also wish they had more in terms of cheese options such as blue cheese, Swiss cheese etc. but aside from that, I enjoyed the meal.

The service was spot on and the wait for the food wasn’t long either. However, we did notice them run out to purchase the whipped cream for my milkshake and the card machine wasn’t working (so bring cash) but, like I said, it’s a new restaurant and they’re just getting to grips with running a burger joint so it won’t lose them any points. Loaded Burgers is definitely a close contender in terms of best halal burger and given a couple of more months, these guys will be in competition for the top spot!

As for me, I completely obliterated any success of healthy eating over the last two weeks in one meal. Well, what can I say? Offer me burgers, especially by the name of Topless, and I’ll be there in no time at all! 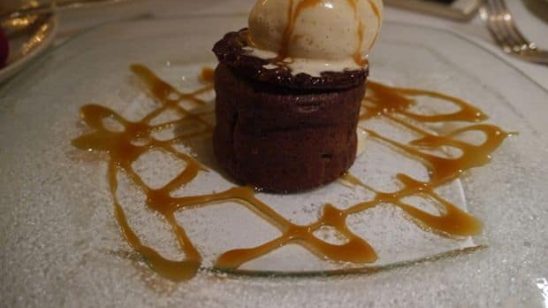 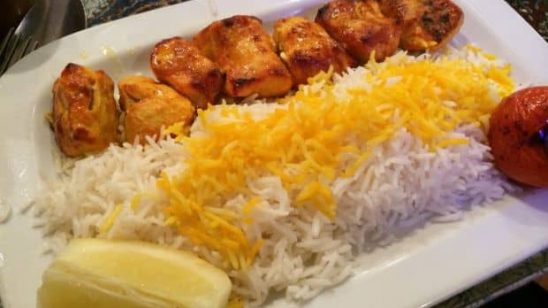