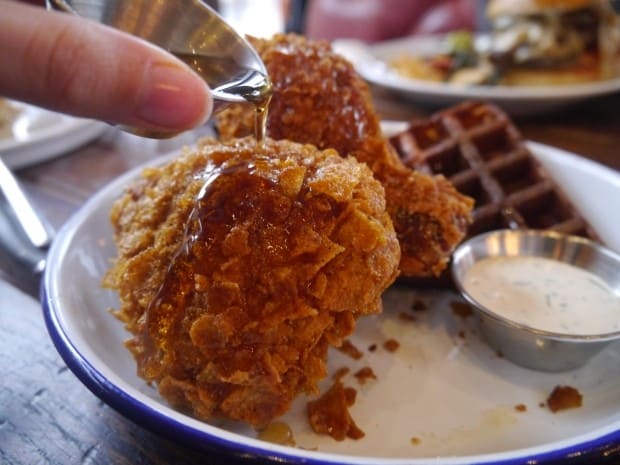 So over the two years I have been blogging, I have covered 68 London restaurants. Out of these, I’ve only eaten at around 19 places without BW, and while BW has mostly caught up, the one place we had kept putting off in order to check out the ever growing number of other burger joints, was Meat and Shake. Meat and Shake were one of the early pioneers of halal burgers in London and I recall walking away pretty satisfied after my first visit, although having vetoed BW’s numerous requests to revisit and having gotten mixed feedback, it only made sense to do a follow up. I know I’ve reviewed here before so I promise I’ll keep it as short and straightforward as possible.

Meat and Shake’s menu has always covered a lot of ground and maybe I had overlooked some of the items but it seems they have a few new features on the menu – from fried chicken to ribs to hot dogs; basically all the essentials. Anyways after much deliberation, we were ready to order.

A bucket of sweet potatoes fries that were thin and slightly crispy arrived. Although tasting decent, a sprinkle of rosemary or some seasoning on the chips could have made it better.

6 huuuuuge wings (you get the option of 3,6, or 9 wings) arrived to the table smothered in buffalo marinade. I honestly prefer smaller wings that are not attached to the joint as I’m a bit fussy when it comes to eating around the bones, so when these double jointed wings arrived, I felt a little overwhelmed. Anyways, upon biting in, the sauce hits you first with its yummy tangyness, but then the flavour lacks from there. The wings weren’t bad, don’t get me wrong, but there was no crisp when you took a bit, they could have been marinated in the mixture a little longer, and would definitely be more manageable if they were a little smaller in size. The blue cheese sauce unfortunately didn’t really help, and tasted more mayonnaise-y than cheesy.

I thought I would be a little different and decided to venture out in a new direction so ordered this dish.Two huge pieces of chicken arrived with two pieces of waffle underneath and two sauces (ranch and maple syrup) on the side. The chicken had been dipped in batter, rolled in cornflakes, and then deep-fried giving it a magnificent crunch. Now imagine a drizzle of delicious maple syrup all over the chicken and waffles (I dropped mine mid-drizzle so flooded my chicken in it) which only adds to the sweetness of the crunchy skin. Sadly, as soon as you’re past that glorious first bite, the chicken meat was kind of bland and needed some sort of flavouring to get away from the almost stale chicken-y taste.

Now for the waffle, you are given the option of having either a blue cheese or cheddar waffle and as a blue cheese advocate, I opted for the strong, rich cheese out of the two. First of all, there’s no denying the fact that Meat and Shake burnt the waffle; the corners were black and most of the waffle was rock hard! Then the flavouring, well, lets just say Meat and Shake should have stuck to an original sweet buttermilk waffle as their base, so as to avoid any flavour combinations that don’t work – adding cheese to everything else going on in the dish was perhaps a step too  far. Such a shame as I really had high hopes for this dish and I left Meat and Shake feeling disappointed.

Haha he won’t admit it but BW was slightly excited when he lifted the bowl of his burger and all the smoke escaped. This burger came topped with smokey turkey bacon, smoky chipotle mayo, smoky cheese, sauteed onions, and the usual lettuce trimmings. The bacon was crispy, of great quality, and added a nice smoke to the burger patty. However after a couple of bites, the burger bun started to collapse due to the abundance of fillings, which was sad because the smokey bandit was actually quite enjoyable.

My cousin, PS, ordered this Mexican take on a burger and opted for it to be cooked well-done. I gave him the side eyes but he protested that he had tried medium just the previous day and still preferred well-done. Anyways, this burger comes topped with salsa, jalapenos, sour cream, lettuce, and tomato, and is served with nachos on the side. The burger was juicy, even though cooked to a well-done, but I felt like the patty itself needed a little more flavour even though they had all the extra Mexican trimmings on top of it. It also wasn’t too long before the burger bun started to fall apart like BW’s smoking bandit!

I chose the Peanut Butter, Brownie, and Banana milkshake [£5.80] again, after the waiter said it was the most popular, and just like last time, it was really great. The shake was thick, not too milky, and had some chunks of brownie pieces in there. This wasn’t the only cool milkshake that they had; they also offer basil creme brulee, strawberry with real pieces in there, and apple crumble! My eyes may have also secretly scanned the dessert section to see something along the lines of “Deep fried oreos with salted caramel sauce”, and I maaay have got a little excited, but I’m afraid my diet stopped me from getting carried away. Maybe one to try next time!

After my first review here, I can definitely say that the standards have fallen somewhat – or maybe my excitement of a new halal burger joint clouded my judgement the first time. The bill amounted to £46.70 including drinks and service. I have to say the service was a little sloppy to start with; they forget to bring us plates for the wings, glasses for water, or cutlery for the food despite our repeatedly asking! But besides that, the waiter was cheerful and happy to offer menu suggestions. The food, especially the burgers, came out in record time and none of us were left waiting alone for our meals – which is rare in burger restaurants. The atmosphere is still the same with the whole casual but comfortable feel to it, and the restaurant was constantly busy with groups of friends or young families in and out the door! Overall, decent, but it might be a while before I go back. 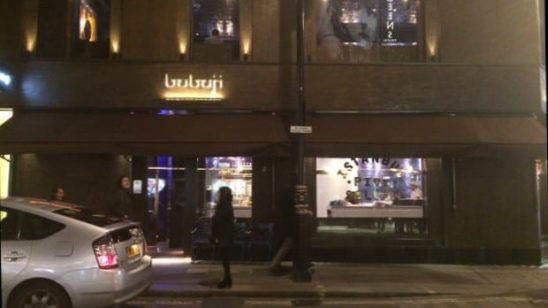 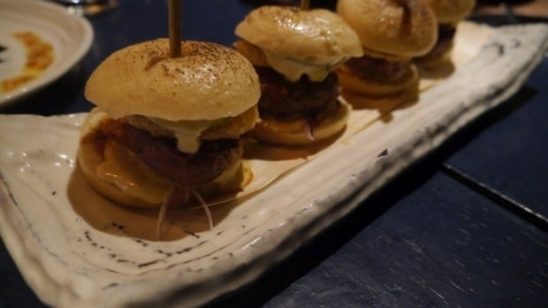