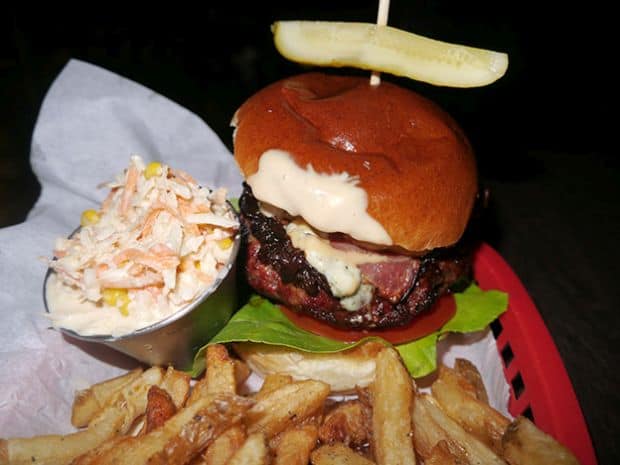 A couple of weeks back, I made a new friend who goes by the name of BW.  Since then I like to challenge him with just about everything – mensa tests, mini golf, wii tennis etc. And as far as my competitive nature goes, I’ve lost everything that I have challenged him against. My pride was slowly dwindling until one day he claimed that he could eat more than me.  Woah, woah, woah – how could he challenge me, of all people?  This was definitely my time to shine and win something at last!  So we both agreed that once Ramadhan was over, we would hit the nearest Chicken Cottage and go head to head with as many spicy chicken wings we could both eat.  What he didn’t know was that I have had practice in the past with a mass load of chicken nuggets; could wings be any different?

So when I was invited to Red Iron Burgers for a complimentary iftar, I thought to myself who better to take than Mr BW himself- a little warm up to show him who’s boss wouldn’t possibly cause any harm.  We sat down and let the ordering begin. 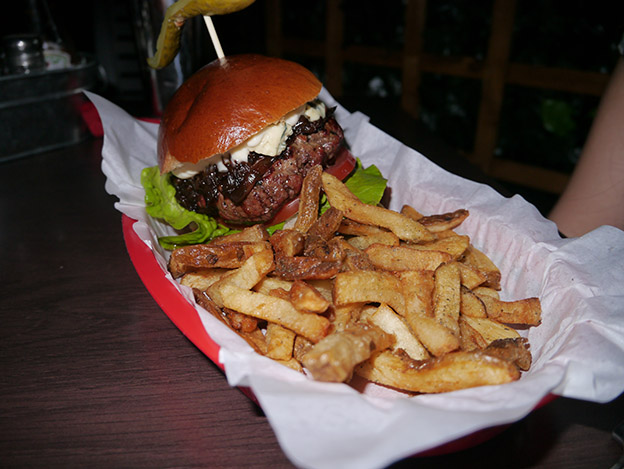 Dripping in just the right amount of juiciness, this burger had everything going for it.  I opted to top mine with blue cheese and boy this was the perfect creamy complement to the medium-cooked beef. 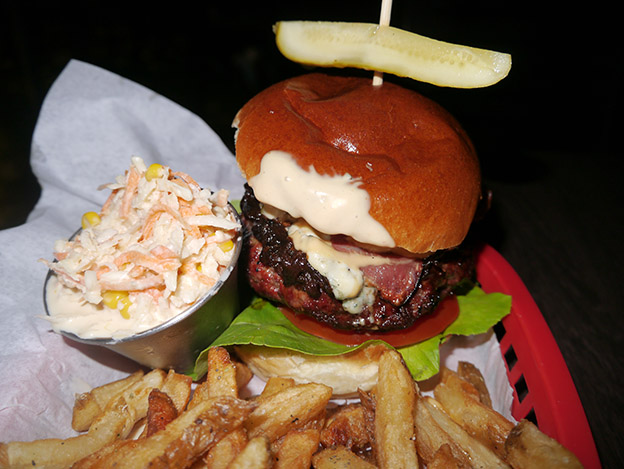 BW decided to go one better and had bacon (turkey) inside his burger.

As usual, the burgers did not disappoint and were cooked to how we ordered. The burgers were bustling with flavours and the onion jam, that I had once upon a time removed from the burgers, was now one of the best bits – balancing the strong cheesy sauce with its sweetness. BW ate his whole burger from bun to base without even leaving a crumb – looks like he had enjoyed it! 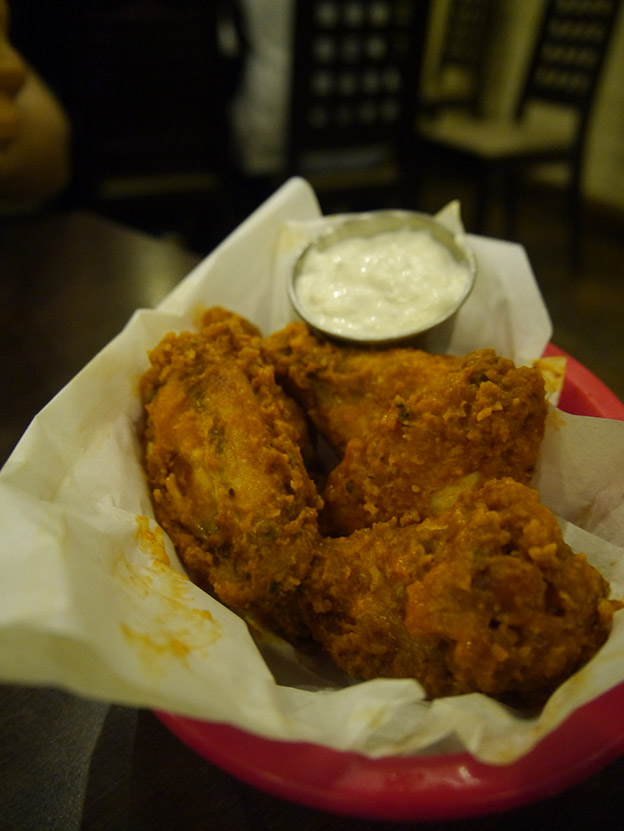 As bad as it sounds, London does not know how to do halal buffalo wings as the yanks do – passing off tandoori as buffalo sauce doesn’t count guys! Red Iron on the other hand knows how to do these wings – fried wings lightly coated in a red sauce with a slight tangy and spicy kick to it. 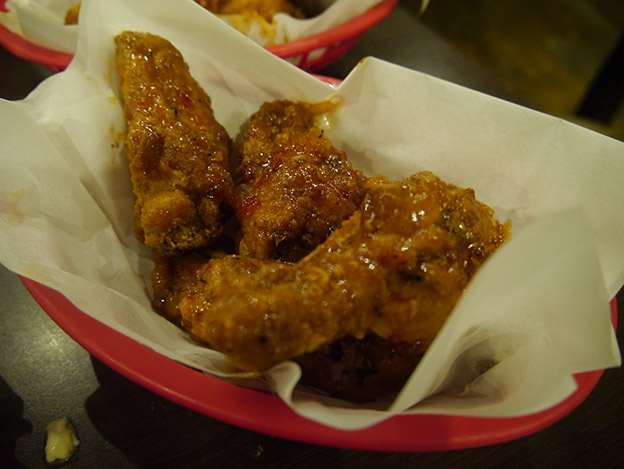 This dish was my favourite of the bunch.  Crispy wings smothered in delicious honey and chilli – savoury yet sweet… my absolute weakness. 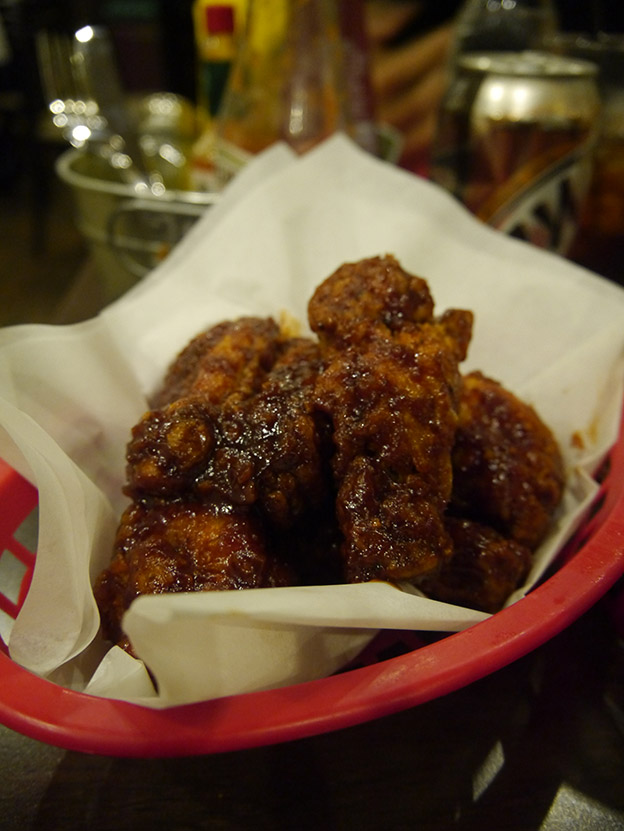 BW liked these BBQ goodies most out of the bunch. The sauce was sweet and tangy possessing a slight smoky aftertaste. 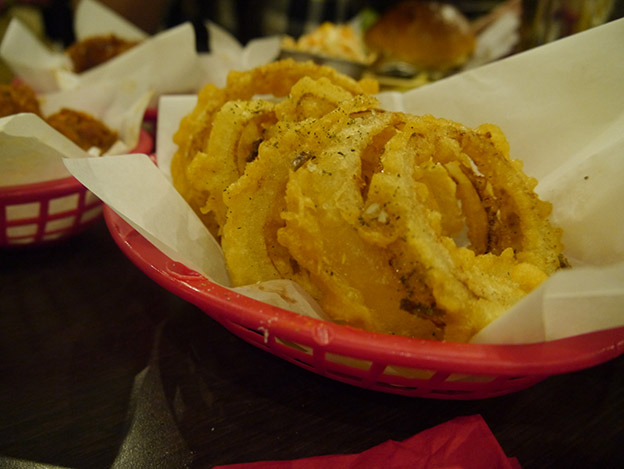 In my last review, I wasn’t that impressed with these rings. When I visited again, the rings were still monstrously huge and coated with a thin crispy batter that even when cold, didn’t go soggy.  A definite improvement and tasted awesome inside the burger! 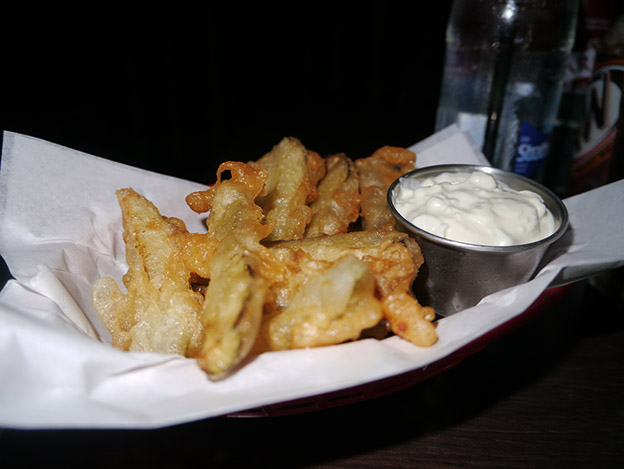 These delicious fried gherkins are my usual order at Red Iron, but certainly something new for BW who was apprehensive at the slight mention of it at first.  He took a bite and I waited in anticipation for his verdict.  He wasn’t really sure as to what to think about these fried sticks of gherkins at first but a couple of bites in, he grew fond of them too! 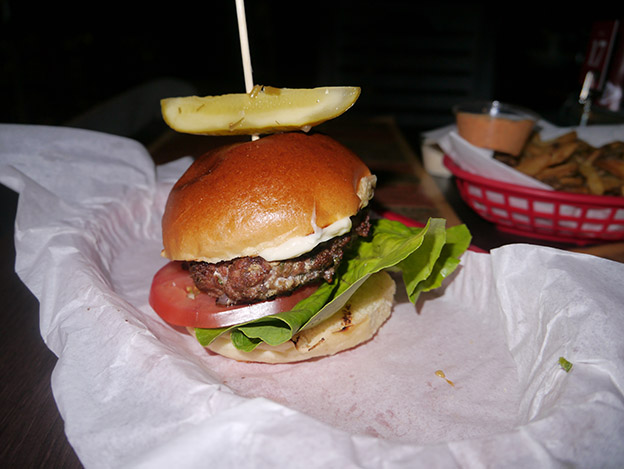 Back in the day (a couple of months ago), lamb burgers were the only meat for me, but then I became a whole new person and left my beloved lamb burgers for the new cool item in town – the beef burger.  I never looked back until Red Iron cooked up a thick lamb burger for me. The burger made me reminisce of all the good times lamb burgers and I have had. The fact that the meat is not processed allows for it to absorb all the necessary flavouring when cooked and tastes even better when dunked into the chipotle mayo sauce. For those who opt for the lamb option, make sure the meat is cooked to a medium – you’ll thank me later. 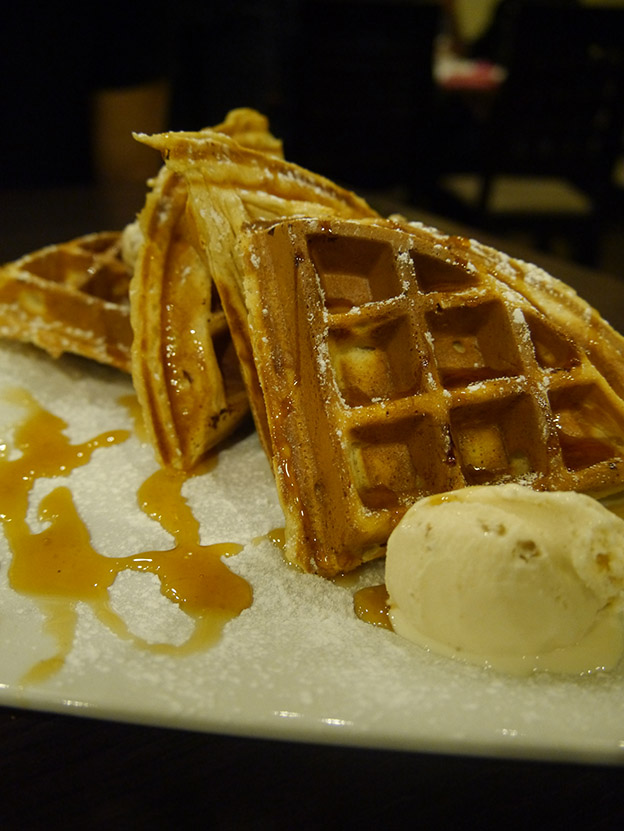 Warm, thick waffles came sliced to the table generously drenched in maple syrup and scoops of maple & walnut ice cream hidden between the slices; A classic and sensible take on waffles. 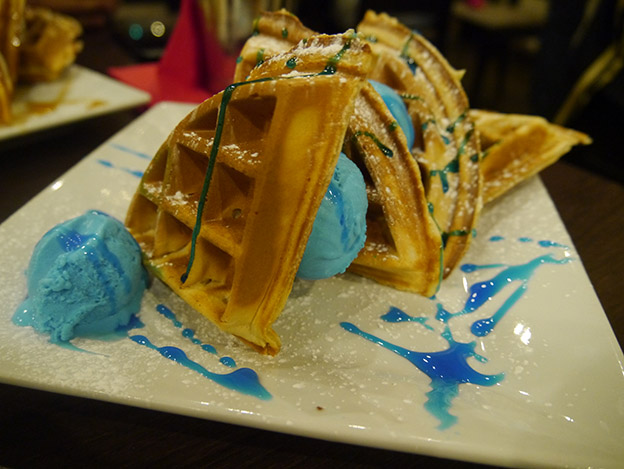 Halfway through eating the waffle with maple and walnut ice cream, along came the punked up version using bubblegum ice cream instead of maple and walnut, so sweet and blue. I absolutely annihilated this dessert and looked up to see BW’s face in shock. I wasn’t stopping anytime soon. He took a bite to see what all the fuss was about, only to say that it was too sweet and artificial.  This dessert seems to be a bit of a hit and miss with the customers, but if you’re into super sweet and bubblegum related – then this is what you want. 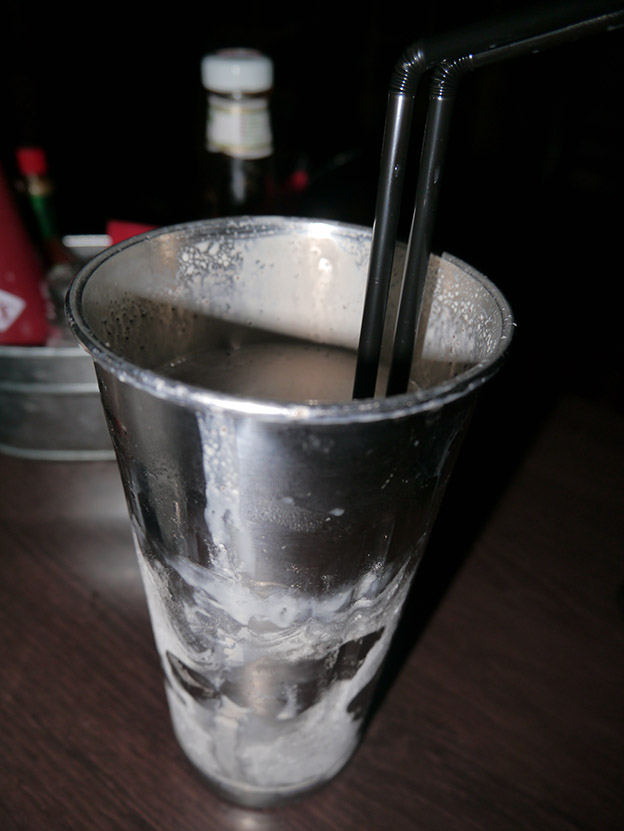 This picture does not justify the man-sized version of the milkshake that got delivered to my table. This was a real milkshake using proper creamy, milky ice cream and machinery to prevent the shake becoming too diluted and runny.

And just when BW thought I had had my way with the milkshake, I ordered a root beer float.  For you root beer virgins, it’s a dollop of vanilla ice cream floating around a glass of root beer. Creamy vanilla root beer – mmm tasted delicious!

Obviously with the amount I had eaten, I had a hard time walking to the car.  Trying to prove a point that I could out eat BW had backfired and he continuously made fun of me being a total fatso whilst I waddled to the car.

Despite the fact that I could barely breathe afterwards, I still stand by Red Iron being the best halal burger joint in London.  And before some of you claim that I’m just saying this because the meal was free, I’m not a dishonest person – I tell the full truth behind every meal I have eaten for this blog.

Red Iron, I feel, is the best due to the fact that there is mass amount of effort and hours that go into every single bite that you take the moment you step in and sit down at the table.  Their meat is fresh and never frozen; the red onion jam is cooked for four whole hours every day; the brioche buns are delivered every morning; and once an order is placed, the food is cooked from complete scratch so it can take a while to be delivered to the table; you shouldn’t expect any less from a burger restaurant that relies on all fresh ingredients. These kinds of things really do add to the taste of your meal and make Red Iron worth hyping up!

Thanks for the meal guys and keep up the good work!

As for BW, you may have won this round, but just you wait till we get our hands on some of those Chicken Cottage wings!

P.S. Don’t forget to order a portion of chipotle mayo to dunk your chips/burger/everything in. It’s deliciously addictive!

(Disclaimer: I was invited to dine at Red Iron Burgers restaurant) 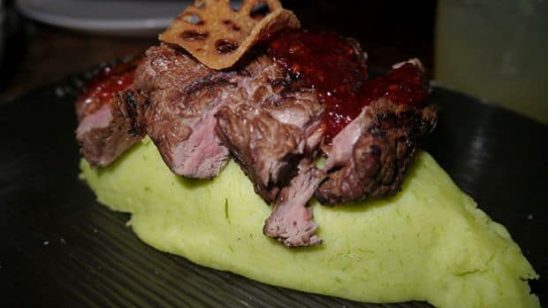 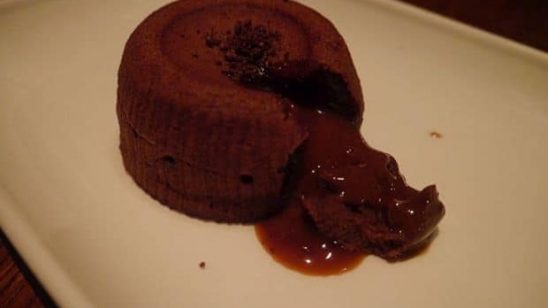