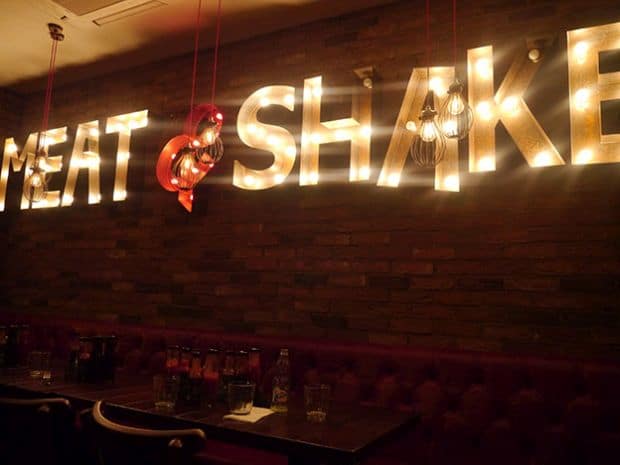 Burgers. It doesn’t look it, but it is presumably one of the hardest dishes to master. Well, I wouldn’t go as far as calling myself a burger connoisseur, but I can certainly define a good burger from an amazing life-changing consuming experience.

A burger isn’t just about the meat itself; sure, the meat plays an important role – it needs to be a medium to medium rare cooked beef patty – packed with meaty juices and bursting flavours (emphasis on the beef because let’s face it, chicken or lamb burgers aren’t real burger materials).  But there’s a lot more to it than that.

It all starts with the bun needing to be squidgy yet firm enough to withstand the juices of the beef patty without falling apart. Many people try using brioche buns that are both delicious and soft, but if not steamed or heated appropriately, then the cook heads for a disastrous crumble.  Of course, the meat comes next, the juicier the better, followed by deliciously complementing toppings that, albeit being tasty, shouldn’t overpower the flavour of the beef itself.

Obviously, from the above you can tell that a burger necessitates a sophisticated process. Finding a burger like that isn’t easy with such fine requirements, but I’ve come very close to the real deal and I’m excited to share it with you guys!

So Meat and Shake recently opened up at the end of September and made a great appearance at the Halal Food Festival where I got a taster of what they had to offer. I was enamoured with its burgers and made a promise to myself that I just had to get down to the restaurant to venture its menu, so grabbing the family, we drove down to Tooting. 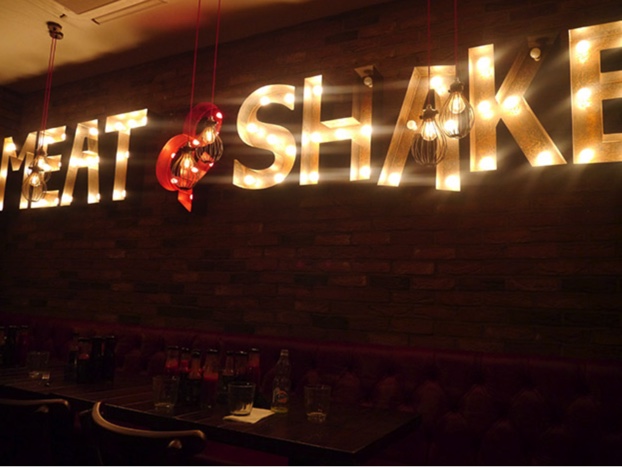 The cool and funky restaurant was small yet packed for a Tuesday night! Luckily we managed to get a table for ourselves and waited for the menus. The waitress seemed to have forgotten about us and after 10 minutes of waiting, we had to catch the attention of a waiter to simply hand us some menus.

After certainly building up quite an appetite and with much deliberation, and after being told that the sliders were not available *sob*, *sob*, we finally decided on what to order… 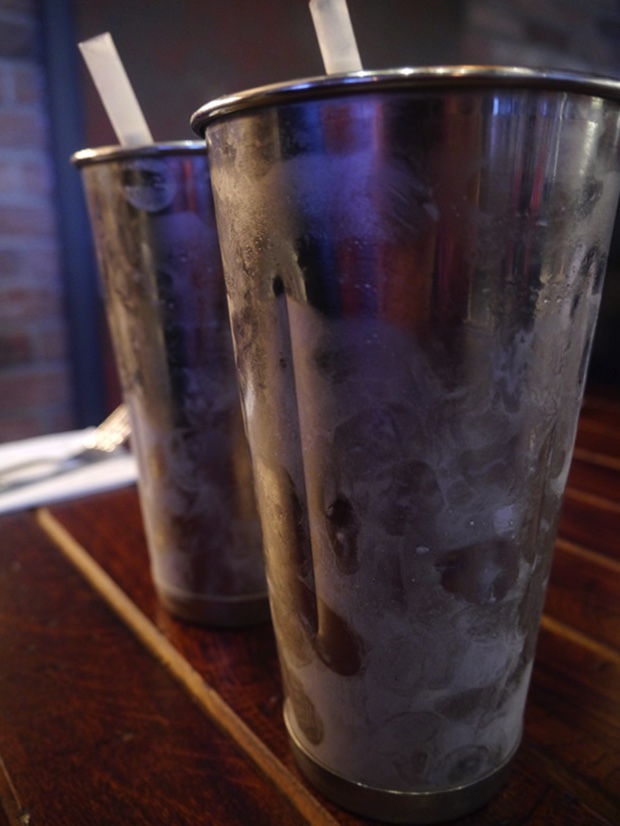 Dad really went for it and ordered a peanut butter/banana/brownie banana milkshake, and like father like daughter, Z ordered the salted caramel while I ordered the plain and simple vanilla milkshake. Mum looked at the fat family that she had brought up and deciding she didn’t want to be a fatso like the rest of us ordered a coke. The mammoth sized milkshakes were scrumptiously creamy and thick, and were not too overpoweringly sweet. The best out of the bunch was the peanut butter/banana/brownie milkshake and when I went for a second sip, it turned out Dad had completely finished the shake before any food had even arrived! 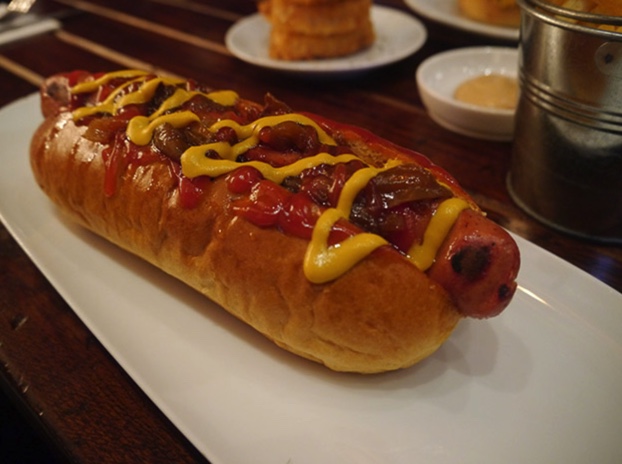 Z was split between the chicken burger and the hot dog, but after some serious peer pressure (from me) she went for the classic dog. The hot dog was a big beefy guy topped with the classic mustard, ketchup and sautéed onions just like the New York street carts. Not one for processed meats, I took a huge bite and ended up really enjoying it! It was not overly meaty, but was cooked well enough to retain its juices and with the added sweetness of the caramelised onions, this dog was a true hit. The bun itself was quite thick and a little too filling, but perfect for those with a larger appetite. 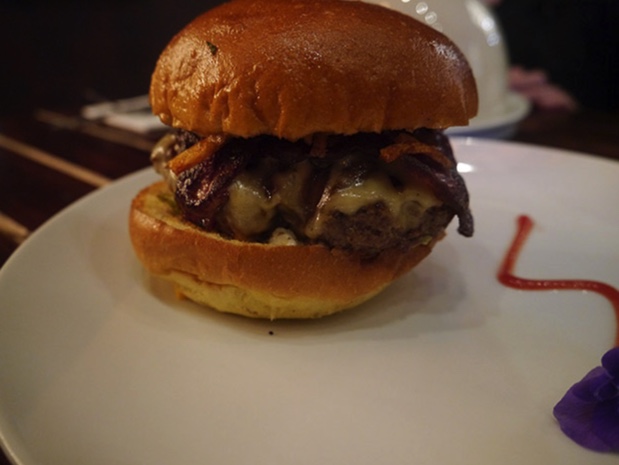 It only makes sense to order the signature burger that is named after the restaurant – these burgers tend to be ridiculously packed with goodies, which is exactly what Meat and Shake’s house burger was. It came piled with crispy matchstick fries, ooey gooey melted cheese, and delicious turkey bacon all on top of an amazing beef patty. Mum doesn’t tend to enjoy red meat, but she finished off this burger to its last crumb insisting it was the best burger she had ever had! 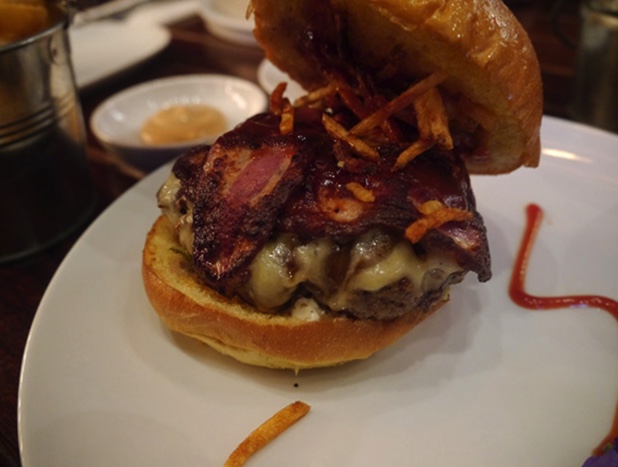 Smoking Bandit
This was an awesome burger. I mean look at how it was presented…

You know with a presentation like that, the burger is going to be amazing. Past the smoke cloud stood a burger that had a smokey feel to it with smokey cheese and smokey mayo. It’s not a burger for everyone but for those who enjoy the barbecue sauce taste, you need to order this guy. 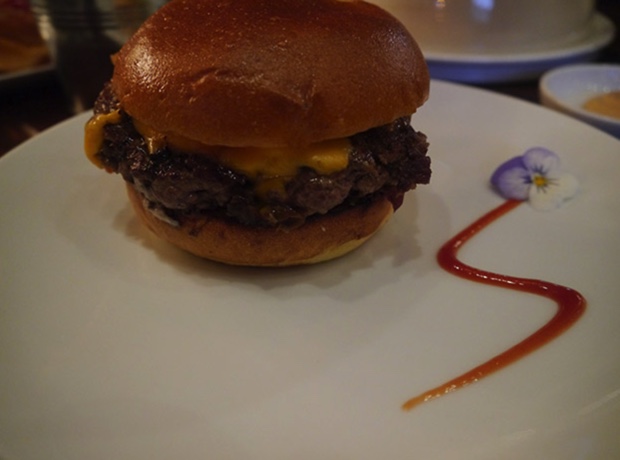 I decided to be the boring one who got the cheeseburger, but for comparison purposes, it has to be a standard first order at any burger joint! Almost drooling on my camera lens I decided to finally took a bite into my burger and the first thing that came to my mind was that the beef patty itself was really good; this wasn’t your average joe. The meat was pure, dry aged (which is better than wet aged) and fresh. It was also perfectly seasoned – enough to enjoy by itself or when doused with sauces! The American cheese was expertly melted all over the patty and the bun was nice and squidgy – it didn’t fall apart even when soaking up all the burger juices. 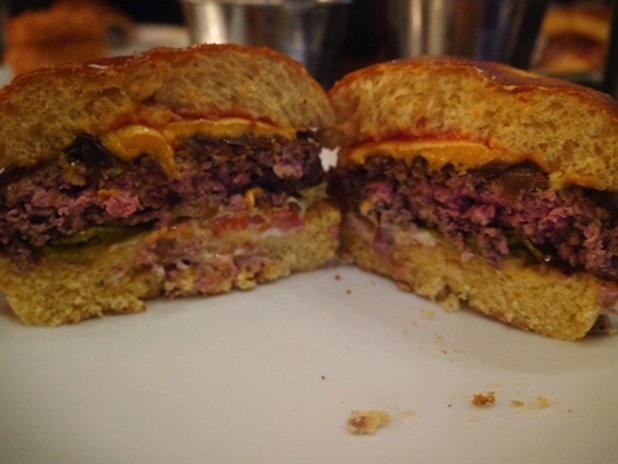 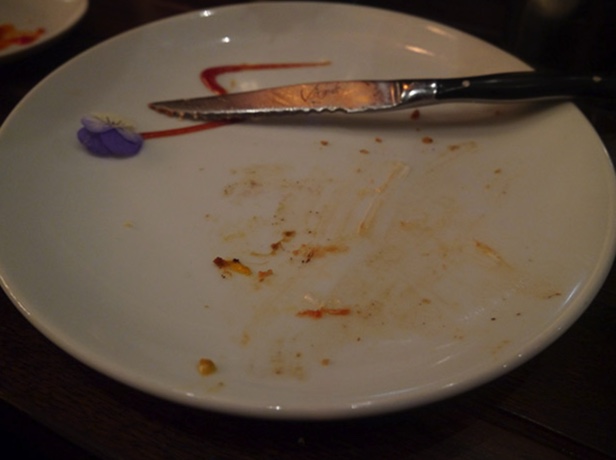 Sides
The panko style onion rings were thin and crunchy, and tasted even better inside the burger! 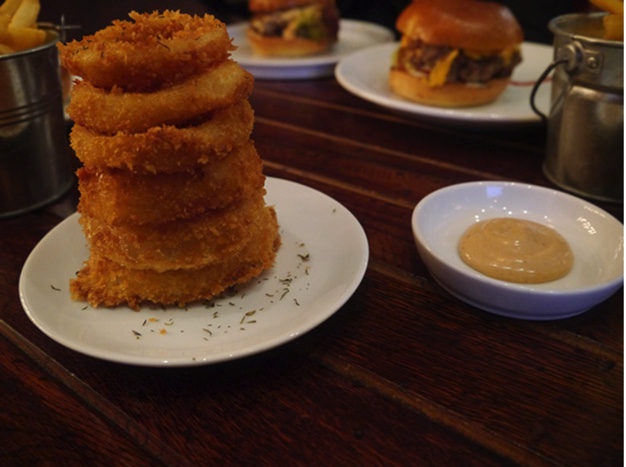 The fries were thin cut and crispy; nothing out of the ordinary, but tasted good when dunked in the 3 chilli sauces available on the table. Warning: these sauces contain ghost chilli and habanero so beware!

Once the food had arrived, there was silence around the table apart from the occasional “let me try yours” and this wasn’t just from our table, this was the case with the tables next to us as well – the food was that good.

Meat and Shake had produced one of the best burgers I had eaten this year and believe me, I’ve eaten my fair share. With a fully halal menu, they had ticked all the boxes of the burger criteria regarding the structure and taste! Although I had only tasted 4 of the items from their vast menu, I fell in love with the burger joint and I’m counting the days till I get to revisit again just to try their famous Rib n Cheese burgers or the cute sliders! With places like Meat and Shake and Red Iron opening up, the halal burger movement is slowly progressing so it’s time to put down those processed burgers and make your way to these restaurants to fully appreciate a real burger!

Halal status verified by the Muslim owner and sign is available on the menus. 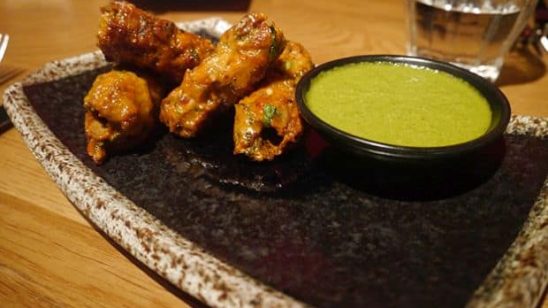 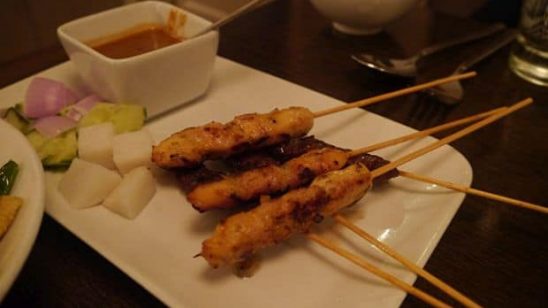