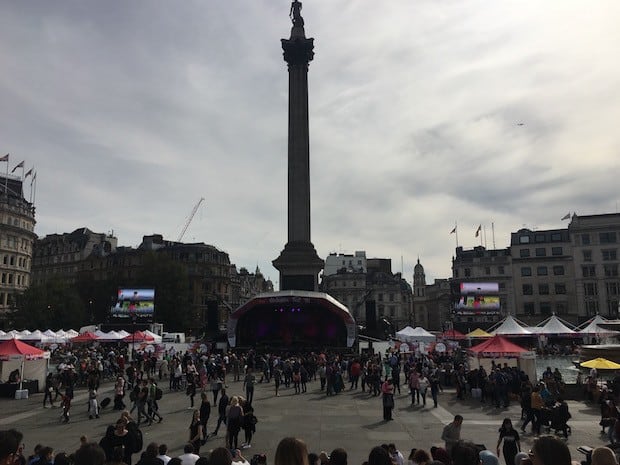 Ever since BW and I maxed out on our local Malaysian gem, Satay House, we were constantly on the lookout for something just as good. The problem, however, was that we also happened to over do it with all other Malaysian restaurants that we found; just like overplaying your favourite song on the radio until you can’t stand it anymore. So, we decided to take a seat back and perhaps try other cuisines. That is, until I read about the Malaysia Fest. 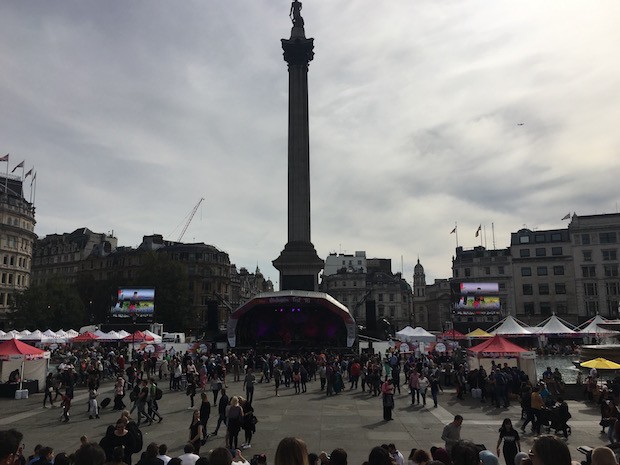 For the last seven years, Trafalgar Square has been the home to Malaysia Night; an evening festival showcasing anything and everything Malaysian. From a stage showcasing singers and dancers to live cooking classes, and several health and lifestyle stands, there is a lot to explore in just one evening. Thankfully this year, the organisers decided to host the Malaysia Festival for an entire day last Saturday which meant there was plenty of time to discover everything!

The best part was obviously the assortment of food supplied by 20 of London’s Malay restaurants, so I put on my stretchy pants and we were on our way! Sadly, Satay House were not present that day but we had the opportunity to try several new places we hadn’t come across before.

Except our first stop was Tukdin, a family-run restaurant I have visited several times before – oops. Perhaps it was out of familiarity, but BW insisted we head there first and check out what they were offering. 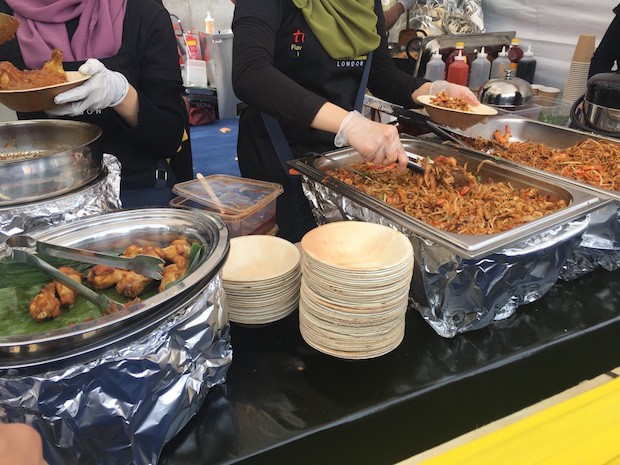 Little fried wings that lay on a bed of courgetti noodles and was smothered with a liberal amount of chunky peanut sauce. The drumsticks had a simple Malaysian curry flavouring, but I think it would have been better with more seasoning and a crispy coating. Nevertheless, the peanut sauce had a good creaminess from the coconut milk and the right amount of spices to help flavour the chicken.

D’Rasa, a Malaysian catering company, were dishing out both sweet treats, and savoury goods. This was definitely the longest queue we had to wait in and I jealously watched whilst others walked away with all their food. Finalllly it was our turn! 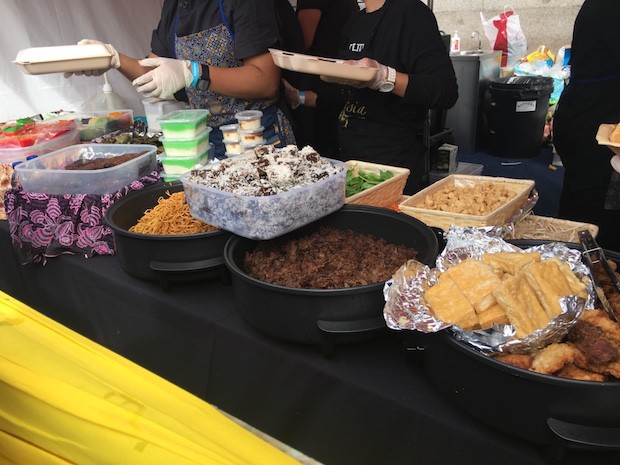 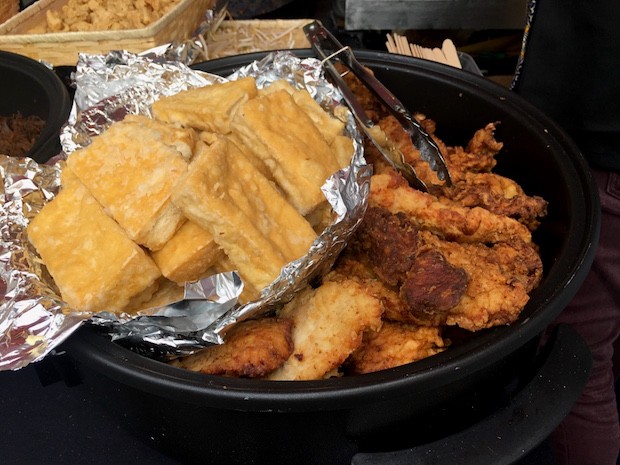 A little different to what the picture had promised, and my least favourite of the day. A big, untoasted roll had been sliced, topped with coleslaw, and piled high with the pulled rendang. It was okay, but the beef was served cold and didn’t have that warm, mouth-melting feeling like normal rendang does. The coleslaw did not add much to the bun, and the bread just seemed too stodgy.

Fried chicken atop a crunchy salad with a generous helping of dressing. Again, the chicken was served cold, which was a shame because the rest of the dish had really good flavour. The dressing was tangy, sweet, and salty, and really enhanced the salad and chicken.

A glass of sweet coconut milk that had been filled with shaved ice, sweet red beans, and green noodles. It probably doesn’t sound like your everyday drink, nor something you would ever think of ordering, but this was the best thing we had all day! Creamy, sweet, and crunchy; this was the ultimate drink/dessert hybrid.

Dapur is a tiny Malaysian restaurant situated in Holborn, and is only open for lunchtimes so I always end up missing them! Lucky for me, they were at the Malaysia Fest so we paid a visit to their stall.

A spicy coconut-based soup filled with noodles, tofu, chicken, and lots of other goodies. Upon having the first sip, the spiciness of the soup instantly hits you followed by the creamy coconut to help soothe your mouth (it doesn’t). The laksa definitely had an abundance of thin vermicelli noodles with the occasional chicken shred or squidgy fried tofu puff. Enjoyable, and I’m looking forward to trying out their restaurant.

Pan Chai, the Pan-Asian sister restaurant of Mango Tree, had joined forces with Chi Kitchen (located in Debenhams) for the festival and all proceeds were donated to charity.

A big glass of rose syrup mixed with milk, and little cubes of black grass jelly floating around. The rose syrup was overtly sweet and it should have been served chilled, but was satisfying.

A special shout out to Malaysian Pancake Co. I first tried out these guys at the original Halal Food Festival and fell in love with their Nutella and banana pancake. Sadly, their queues were outrageously long throughout the day and I didn’t manage to try them out, but here’s a little taster of what they offer.

There were a few more stalls I would have loved to check out, such as Roti King, C&R Cafe, Rasa Sayang etc, but having sampled all of the above between just the two of us, I don’t think we could have eaten another bite. 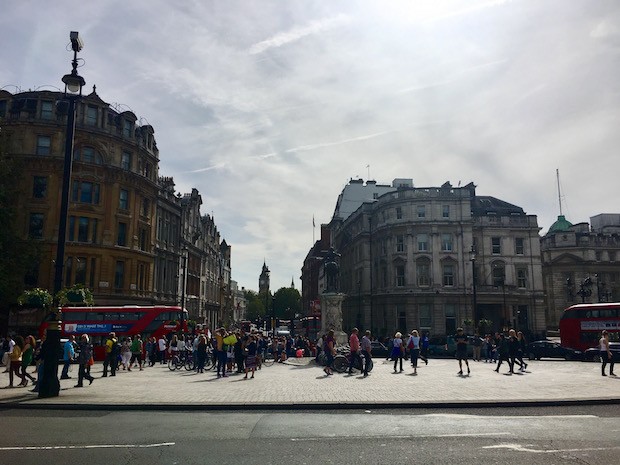 It was the first time I had visited and I definitely filled out my Malaysian food quota for the rest of the year, but I would happily return in the future. It was very well organised, affordable (no entrance fee either), the choice of food was unlimited, and there was plenty of space to navigate around. If you are planning to making a visit to the next Malaysia Festival, do go with a group of friends so that you can try all the food and drink offerings available. Also, it may be worth going earlier in the day or late at night so you avoid the big crowds.

See you guys there next year! 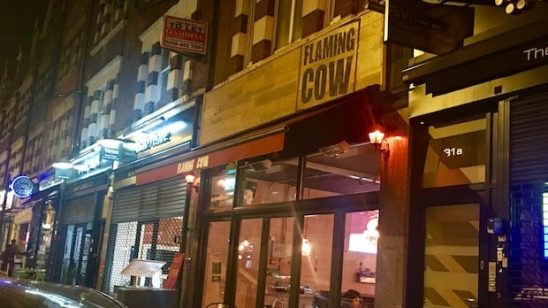 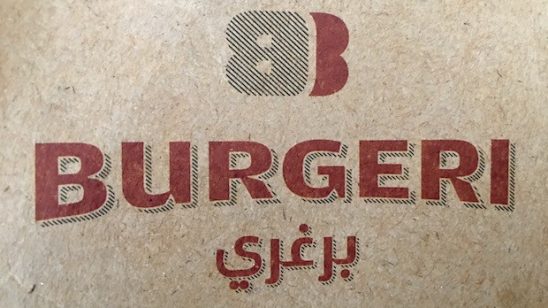